Deleted from the game by No Name

Episode 79
Zhang Fei[1] was a member of the Giga Empire.[1] He was a member of Giga's Team 1 and was one of the 12 Generals under the direct command of Han Sung-Gong.[2]

Zhang Fei was amongst the many Giga players that took a last stand when a Giga castle was sieged by New Nightmare. He was deleted from the game by Queen No Name's Stream of Destruction and has lost his memories of Lucid Adventure.[3]

Zhang Fei is a young man with short white hair and long bangs that covers his glowing eyes. He wears a white and green blazer coat with black open-collar shirt underneath, white pants with a slim purple belt and blue sneakers. Sometimes, he wears the classic male Giga uniform albeit without the lion-shaped pauldron. 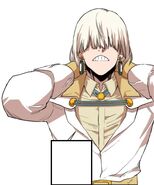 Zhang Fei disappointed and bored during the Summit Meeting.

Zhang Fei loves and enjoys fighting, always looking for strong opponents to face off against like Tac and even Hardcore Leveling Warrior in the past. He was disappointed during the Union of the Four Guilds, knowing that Han Sung-Gong will most likely pick Xiang Yu as his champion in the duel. Zhang Fei sometimes takes things too seriously to the point of roleplaying.

Guan Yu is the older brother of Zhang Fei. Their relationship is quite reminiscent of their mythological characters. They are quite close with one another and seemed to have played the game together for a long time.

Zhang Fei has long sought to fight with Taek as he thought he'd be a challenge for him. When they fought, Zhang Lei made a mistake of underestimating Taek, knocking himself out in the process.

It was hinted in the past that Zhang Fei and Hardcore Leveling Warrior fought and that the former had trouble against the latter.

As part of the Twelve Generals and a high ranker himself, Zhang Fei is a highly skilled and strong player who was chosen by the Emperor himself to personally protect him. He was able to achieve Heroize in the first 6 months of playing Lucid Adventure and instantly bloodied Taek, who possessed formidable defenses, when they first collided in their fight and even pierced through his body.

Wearing his armour, Zhang Fei's damage output is ranked among the Top 1%, which is among the likes of Stone and Hardcore Leveling Warrior.[3]

Attack Power: Zhang Fei's physical damage is ranked among the Top 1% which is among the likes of Stone and Hardcore Leveling Warrior.[3]

Zhang Fei's personal attribute that grants him the ability to use skills based on the legendary warrior, Zhang Fei.

Zhang Fei prefers to fight at a distance, taking advantage of his long spear to attack his opponents and be out of their range at the same time. He instantly goes for the kill whenever he sees a weak point in a fight.

At some point in the past, Zhang Fei had trouble with Hardcore Leveling Warrior.[4]

Zhang Fei was first introduced in the series during the Invasion of Giga in Yopi Land. He blocked Taek's attack with his spear from hitting Han Sung-Gong and challenged him to a fight. After their first collision, Zhang Fei bloodied Taek, mocking him that his strength was a lie.

When he saw an opening, Zhang Fei attempted to take advantage but made a mistake as he had underestimated Taek and got knocked away in the process, defeated. He was then seen fighting the army of Pooh Upooh as the Gods teleported both armies.

During the time skip, Zhang Fei was stated to be in the middle of a battle according to Guan Yu.

Zhang Fei complained about Xiang Yu being the Chairman's pick to fight Heart Heater or Lu Bu and that he was the favourite among them until Guan Yu joked about it.

After the Dragon of Evil devoured Xiang Yu, he and Guan Yu readied themselves for battle.

Zhang Fei in his armour, Heriach, Apple, and Liu Bei ready themselves for their last resistance against the incursion of New Nightmare. After No Name lands upon them, Zhang Fei and Heriach engage her in combat but both of their attacks were blocked by No Name with her own hands. Both of them are shock at this as they are blasted away by No Name to a wall.

Zhang Fei and the other rankers ready themselves to engage No Name once more but they are instantly swept away and defeated. Zhang Fei, along with the others, are then deleted from Lucid Adventure, along with their memories to it.