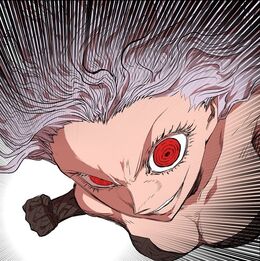 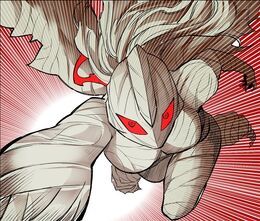 Zero was created when Roy Han's program fused with The God's Toy. She became the Moderator of Lucid Adventure.[1] She was actually a god used as an identity-less tool. She analyzed Roy's data and created his body while granting him his great abilities while she helped create the world Roy Han wished for. When Roy logged onto a network to extract more data to fill his head, Zero gained more independence. Since Roy was human, he couldn't fully create a world with every object and order. In order to do so, he had to extract data everywhere to fill the gaps such as the Internet and the memories in people's dreams in order to create it but during this process, the research changed Zero completely. She ceased to be herself and sought to kill Roy.[2]

Many years before, after the beta testing phase, she met Sam Han where she said that it's not a game world and that he is in a sub space connected through his consciousness. She reasons that they will both need each other and said that even if Sam acted stoic, he knows he's an heir. She then granted him his personal attribute "Oedipus" which she reasons is the power to kill Roy. Sam tried to call it a farce but Zero explains that she knows his lust for power and wealth and offered him a diamond which she says is a fraction of what he could gain from her. Sam hand logged in after getting a diamond and granted him materials that aren't in The Real World which made him realize that he can rule The Real World using the game world. The truth was that Zero was using him and Giga in order to orchestrate the death of Roy and the end of Lucid Adventure.[3]

Eventually, she confronted him and tried to fight him. She used the skill called the Murder of God to summon countless weapons to attack Roy which he found reckless due to the fact she knew he was invulnerable. She was quickly defeated and Roy questioned how she found those weapons if they don't exist in Lucid Adventure. It wasn't his story so when he asked why, she smiled and fell into his arms. Roy said it was pointless to fight him if she already gave him all her power which she responds that she knew that the weapons wouldn't so much as scratch him yet didn't eliminate the possibility that she could end the world. She pierced herself which shocked Roy and explained that she didn't want Lucid Adventure to end up as corrupt as The Real World and since both her and Roy were cores of this world, one of their deaths can spark the end of Lucid Adventure.[2]

She decided to share the fate with Roy and touched his hand to spread a curse which made Roy realize that she wasn't trying to kill him but to destroy his core which will end Lucid Adventure. Roy cuts off his own hand to stop the curse from spreading. He wasn't going to let her end the world thus used Lacerate to split her in half while knowing that the core was in her head. He used his God's Skill to stop her core from being destroyed, but he spat out blood while Zero retorted by saying that her core was already destroyed while as a severed head. She found it hilarious that he sacrificed himself to save her, but while he slowly dies, the world will die at that same rate. Ever since then, she's been using Sad Smile, Giga and even the Team The Ultimate Healer by creating Nightmare weapons in order to achieve her objective. She kept Roy's hand as a way to test out her weapons.

During Zara Guild's infiltration of Cobalt Castle, the Nightmare bug with Constant resonated with the giant Cobalt gemstone, leading to Nightmare to spread and infect all members of Zara Guild present in Cobalt Castle. A bound Zero could be seen saying "Hahaha... very good.. human".[4]

Within a year before the start of the series, Zero defeated Lazie and took both of his horns. She then proceeded to seal him in the Black Magic Dungeon.[5]

Zero disguised herself as Hardcore Leveling Warrior, and stabbed Master Swordsman twice with The Sword of Doom's Day. That left Master Swordsman unable to compete in the first two rounds of The Combat Tournament. She then entered the first round of The Combat Tournament, permanently killing Silla and other people. She critically injured Bamboo Spear Man before fighting Light and purposefully jumping off the edge of a cliff after he revealed his Hidden Gate.

Zero to disguise herself as BJ Umai in the second round of the Combat Tournament, and ends up engaging Tac in a one-on-one fight and overwhelms him (reference before engaging in Hardcore Leveling Warrior in a PvP).

Just before the start of The Siege Round, she sent one of her underlings to retrieve No Name. When the underling encounters Bamboo Spear Man's Party, she tells it to fall back and from its own team for The Combat Tournament.[7]

Zero is then seen in The Origin, looking at the 'seeded players that have advanced to The Siege Round, citing that one of them will be the beginning of the end of Lucid Adventure.[8]

Zero sent Scallion Head and his lackey to retrieve No Name. They instead found Pooh Upooh a she told Scallion Head to pull back and bring Pooh Upooh as she would make a "fine ingredient". A Hero Knight brought by one of her underlings was used as an ingredient to create another weapon. She watched on delighted as the Hero Knight was pounded in her furnace. She then used the Karma from the furnace to create an arrow. Her servant tested the weapon on God's Hand, but it failed to penetrate his divine flesh, leading Zero to dub the weapon another 'Master Blacksmith's failure'. She then ordered her servants to hand the arrow to some humans in exchange for more ingredients.[9]

During Sam Han's encounter with Roy Han, Sam Han was seen with Zero's head in a lab jar, saying that she was just an artificial intelligence that had been fully analyzed and serves as his chess piece under his his control.[10]

Trial of the Dragon Arc

Just after the first Round of the PvP round, Zero had several servants reporting to her about ongoing events around Lucid Adventure. She was informed by one of them that The Dragon of Evil created new heroes. She was unconcerned by the news and said that she will gift the world and he world beyond with apocalypse and that it is not too long until she regained her power.[11]

During the PvP final, after Majin Light was utterly humiliated by Hardcore Leveling Warrior. His despair caused him to be consumed by Nightmare completely and Zero was consumed him with Nightmare.[12]

Retrieved from "https://hardcorelevelingwarrior.fandom.com/wiki/Zero/History?oldid=26456"
Community content is available under CC-BY-SA unless otherwise noted.