“What are you talking about? Our guild won't lose to Giga”
― Armes to Han Gun-Ho[source]

Episode 51
Zara Guild was a guild in Lucid Adventure.[1] It's guild master was Armes.

Zara Guild was a rising powerful guild back in the early days of Lucid Adventure. Zara Guild began dominating and conquering other guilds at an incredibly fast rate in an effort to complete the Absolute Quest.

It's tremendous progress in the completion of the Absolute Quest in such a short time made even the mighty Giga Guild wary. This eventually led to Zara Guild being framed by Giga, which eventually led to the Guild's dissolution.

The influence of the guild can still be felt in Lucid Adventure to this day. Despite being such a small guild, many of it's former members went on to become some of the most powerful and influential people in the game.

The Zara Guild was a guild with amazing potential and was regarded as a threat to Giga's attempt to conquer the game. It was without a doubt one of the strongest guilds of it's time.

Aiming to become the first guild to conquer the game in the Absolute Quest, it had 3 players with the power of high rankers and one with high ranker potential. Armes hid her strength but was as stronger than The Best Swordsman, who was ranked 3rd at the time. Hardcore Leveling Warrior was ranked no.88 and Constant had great potential.

The Guild successfully defeated several guilds including Tete Guild that was led by the ranker Kkakdugi. The guild would have become the first group of players to conquer Cobalt Castle had it not been for Han Gun-Ho's machinations.

Eventually, it took Giga framing Zara Guild for using Nightmare for the guilds dissolution to begin.

At some point in the very early days of Lucid Adventure, the Zara Guild was created by Armes.[2][1]

Zara Guild completed a quest thanks to Armes leadership. Armes found Tempest near a dungeon and introduced him to the guild. Tempest ended up singing a song as an initiation.[4] After everyone leaves Armes alone, she begins planning the guild's next course of action and thinks Cobalt castle is a step to far and Tete Guild might be good opponents. Armes defeats The Best Swordsman in a duel and pleads with him to take care of the guild after she's gone.[4]

While The Best Swordsman led the rest of the Zara Guild members to fight Tete Guild, Sad Smile summoned a hoard of undead that explode when they are hit on Zara Guild's castle. Armes was the only one in the castle and took some damage as the undead destroyed Zara Guild's area. Hardcore Leveling Warrior arrived as back up and eventually all the undead were defeated. Constant healed the injured Armes.[1]

Armes got a 'page' from Kkakdugi's 'book' for the Absolute Quest before Kkakdugi is apprehended by Giga Guild's security team for using Nightmare.[5] They were approached and invited by Giga to join their guild but Armes immediately refused stated that they'll never lose to Giga.[5] The guild celebrate their victory over Tete Guild.[6]

Zara Guild then set its eyes on Cobalt Castle, which was known to be a highly impregnable castle that no guild was able to conquer before. Zara Guild slowly came up with a detailed plan with everyone as two weeks go by in the Real World. Two weeks later (real world time) after meticulous planning, Zara Guild raided Cobalt Castle.

After Zara Guild's Shield Disarming Team successfully made a hole in Cobalt Castle's magic shield, Choco Bibi mass teleported a portion of the guild's army, dubbed "Infiltration Team", inside the fortress. The infiltration team aimed to open Cobalt Castle's main gate in order to let the rest of Zara Guild's troops into Cobalt Castle. At the climax of the battle, they were suddenly infected with Nightmare when the Nightmare bug in Constant's pocket resonated with the giant cobalt Gemstone, which ended up immobilising all the NPCs.

Han Gun-Ho and Giga are revealed to be behind the Nightmare infection and engage Zara Guild. Armes defeats multiple Giga Guild Security team members and appeared to have the upper hand until the rest of he guild were captured by Giga Guild's secutrity team and used as a bargaining chip. Armes surrendered to save her guild members from being deleted from the game. Armes was captured taken to Empra, where she had her 'page' is taken and told she was permanently banned from playing Lucid Adventure and telling anyone what happened at Cobalt Castle. Constant tells the guild that Nightmare took Armes which led to Zara Guild hunting Nightmare in search of Armes

After Armes' disappearance, the guild fell apart without her leadership. After a while, A lot of guild members left the guild. They were scouted by Giga including Constant and felt it was time for them to move on. Even after Nightmare was defeated, Armes was never found.

After Zara Guild's break up, The Best Swordsman formed the Zara Guild with Choco Bibi and Tempest. They planned on following Armes' legacy in their own way by completing the Absolute Quest. 4 years later, The Best Swordsman eventually became the 4th ranked player under the Lucid Ball Ranking System.

Before leaving Zara Guild, Hardcore Leveling Warrior defeated The Best Swordsman and took his Moonlight Slash and was ranked 3rd during The Very First War. He isolated himself from companionship and became a solo player that did anything to win. Eventually, he rose to become the first ranker in the server. He became hostile towards Giga after he found out they were involved with the Nightmare incident in Cobalt Castle that led to Armes' disappearance. He lost his rank and slowly fostered new companionship with Dark and Sora on the way to winning the last ever Combat Tournament with them After the Gods died, he became the system limit for the Lucid Ball Ranking System.

Constant joined Giga and grew to become one of the strongest and most mysterious players in the game. He swore revenge on Chairman Kim for the treatment he received in Chairman Kim's workshop. He is still eager to be recognised by Hardcore Leveling Warrior and is a yandere for him.

Dorita and Lotus Girl reunited with Constant sometime after. It was awkward at first, but eventually they joined together.

No Name, a mysterious Nightmare that looked like a cross between Armes and Zero appeared sometime after Armes' disappearance. Not only are her attire and short sword identical to Armes', but even her personality and strategic ability are similar. During the last ever Combat Tournament, it was revealed that she had the Armes' personal attribute and even fought like her. After the time-skip, she formed the New Nightmare Guild and is aiming to clear the game by clearing The Absolute Quest like Armes' intended to. The exact relationship between Armes and No Name is currently unknown 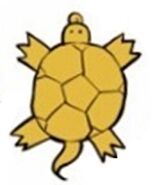 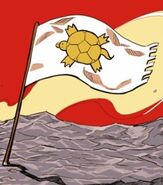 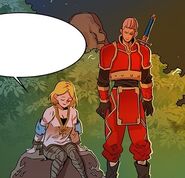 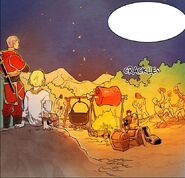 Zara Guild members putting up their hands and screaming, signifying they want to stay with Armes on their journey forever 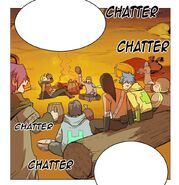 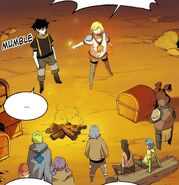 Armes and Hardcore Leveling Warrior with the defeated Kkakdugi 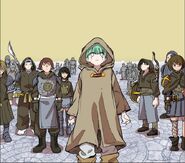