“I will be the King of this world”
― Yopy[source] 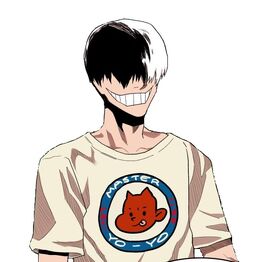 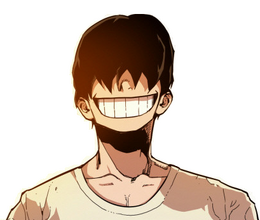 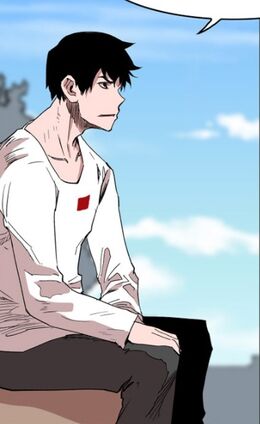 Doo-Yeop,[5] known as Yopy in Lucid Adventure,[1] was the Guild Master of Yopy Land, the former King of Yopy Land,[1] the former leader of The Eastern Alliance[2] and was Ranked No.33 in the Lucid Ball Ranking System.[3] Together with Akira, he won a previous iteration of The Combat Tournament.[6]

During the war on Nightmare, Yopy was a constant thorn in Giga's side. He discovered that Lucid Adventure can only exist if the players exist.[5]

He supported Dark's Party at various points throughout the first season which further put a strain on Yopy Land's armistice with the Giga Empire. Yopy was enraged when Giga broke the armistice to capture Han Gun-Jae and was close to battling Han Sung-Gong before the Gods intervened.[7] During the Combat Tournament's PvP Round, Yopy served as one of it's staff member.[4]

After the Combat Tournament ended, Yopy used his Last Card to summon Han Gun-Jae, who he then directed to kill the God of Combat, God of Time and Space and Zero.[8] This led to the rules of Lucid Adventure being rewritten.[8]

After Taek was killed by Giga during the two year timeskip,[9][10] Yopy joined the Big 4 of the underworld, which includes Sad Smile, to form the Anti-Giga Coalition.[11] During the Big Guilds Summit, Yopy supported Dark as the leader of the Guilds' Union.[12]

During the subjugation of Nightmare, Yopy made a bet with the Big 4 of the underworld on who could takes down the most Nightmares until the end of the war. Yopy got too excited and took down enough Nightmares to go from being unranked to being the Rank No.33 Player.[3]

After Giga lost half of their core power during Demon King Ge Des's invasion of Charming Castle, Yopy broke the contract enforced by Principal's skill and led an assault on Giga's Lion Heart Castle.[13][10] Yopy eventually reached the throne room of Lion Heart Castle where he was confronted by 6 of Han Sung-Gong's 12 Generals and Kongming.[10][14] He eventually defeated them all and engaged Han Sung-Gong in a forced PvP.[15]

Yopy beat Han Sung-Gong within an inch of his life and only Akira's timely intervention stopped Yopy from executing a sleepwalk command that would have seen him murder Han Sung-Gong in the real world.[16] Yopy's duel with Akira made him realise the error of his way and as he was about to execute a different command, both he and Akira were critically injured by Han Gung-Ho, who then reveals that he is the true culprit behind Taek's death.[17][18] Yopy is subsequently deleted from the game by his Nightmare clone.[18]

In the real world, Doo-Yeop has black spiky hair with black eyes. It was cut shorter by the time the PvP Round started.

In the game, Yopy has an almost permanent toothy grin on his face, save for when he is enraged. He had short black hair with long bangs that covered his black eyes. He was usually seen wearing a cream coloured short-sleeved shirt with a Master Yo-Yo insignia on its front. He wore black jeans and white trainers. He sometimes carried a bag with him, especially when he was on a quest.

During the Siege Round, he wore a cream coloured long-sleeved t-shirt and wore a red baseball cap on his head.

“What kind of a freak are you?”
― Nightmare Yopy

Yopy is generally very laid back and very hippy like in his behaviour, but he gets serious when citizens of his country or those close to him are threatened. He can be prone to acting rash when one of his own is hurt.[19][19] Despite his laid back and playful demeanour, Yopy only does things based on his calculations.[20] An example of this is on the surface, he acted friendly with the God of Combat, but ruthlessly killed him and his brother once the chance arose. There is a mysterious side to Yopy that even had his own Nightmare Doppelganger calling him a freak.

He hates being controlled and defies those who he feels seek to control with force or money. He turned down Han Sung-Gong's offer when he tried to buy him off. Even in the face of a war with Giga, Yopy got involved with Dark and threw Dark a birthday party just to spite Giga. He resented the Gods because he felt that they did not manage the game, but used humanity as their puppets.

Yopy's main goal was to conquer Lucid Adventure. He ultimately found a way to get rid of the Gods, returning their power back to the world in bits. He believes the power of God should be given to humanity meaning the humans can decide and rule the world of Lucid Adventure thus giving him a chance to rule it eventually.

Yopy admittedly likes people who look noobish (Cheap and low in quality). He also has a bad habit of being late. This usually leads to him being chastised by Pooh Upooh and/or the people he is meeting up with.[1][2][11][21]

두엽 is translated as David by LINE Webtoon.

요피 is always translated and romanized as Yopy. Yopy will be used for the Wiki. in fact, the person that Yopy is based on, author Doo-Yeop, calls himself "Yopy" on his twitter handle to further cement the point that Yopy is the correct romanization instead of Yopi.

Retrieved from "https://hardcorelevelingwarrior.fandom.com/wiki/Yopy?oldid=49185"
Community content is available under CC-BY-SA unless otherwise noted.