Yi Sun-Shin is a legendary Korean Naval Commander and general who was never defeated at sea nor lost a single ship under his command during the Japanese invasion of Korea. His naval victories were instrumental in repelling Japanese invasions of Korea in the 1590s.

In reality, the power of Yi Sun-Shin cannot be compared to heroes in mythology such as Hercules, but since Lucid Adventure is a game powered by the dreams of players and 100% of the players are from Korea, Duke of Loyalty and Warfare 's rating was measured much higher than it was supposed to be, with an expected rating of "SSS".[1]

The Best Swordsman decided to forgo the recommended Job of Rider General that the System recommended to focus everything of Yi Sun-Shin on the sword.[1]

Water Attribute Skills (물 속성 기술을, Mul Sogseong Gisul-eul): Due to Yi Sun-Shin being a naval general, The Best Swordsman is able to use Water based skills such as Water Dragon Wave.[2]

Conceptual Magic: The Best Swordsman is a able to use conceptual magic due to his person-type personal attribute. As with all Conceptual Magic, he has a Concept Destruction, but this has not been revealed.[3]

The Best Swordsman in his full attire

The Best Swordsman facing off against his Nightmare Clone 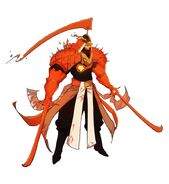 Admiral Yi Sun-Shin (), sometimes Romanized as Lee Sun Shin or Li Sun Sin, was a Korean admiral and military general famed for his victories against the Japanese navy during the Imjin war in the Joseon Dynasty. Yi became an exemplar of conduct for both the Koreans and Japanese. Despite the fact that he had no prior naval training, Admiral Yi was never defeated at sea nor lost a single ship under his command to enemy action, and military historians have placed him on par with Admiral Horatio Nelson as one of the greatest naval commanders in history. His title of Samdo Sugun Tongjesa (), literally meaning "Naval Commander of the Three Provinces", was the title used for the commander of the Korean navy until 1896. Over the course of his career, Admiral Yi fought in at least 23 recorded naval engagements, all against the Japanese. In most of these battles, he was outnumbered and lacked necessary supplies. His most famous victory occurred at the Battle of Myeongnyang, where despite being outnumbered 133 warships to 13, he managed to disable or destroy 31 of the 133 Japanese warships without losing a single ship of his own. Yi died from a gunshot wound at the naval Battle of Noryang on December 16, 1598. His last words, "The battle is at its height. Beat my war drums. Do not announce my death", are often cited as an important part of his character. Although his successes were often ignored by the Korean royal court during his life, after his death various honors were bestowed upon him, including the title of Chungmugong (; Duke of Loyalty and Warfare), an enrollment as a Seonmu Ildeung Gongsin (; First-class military order of merit during the reign of Seonjo), and two posthumous offices, Yeonguijeong (; Prime Minister), and the Deokpung Buwongun (; The Prince of the Court from Deokpung). Over time, Admiral Yi became a national hero in Korea, and remains so today.

One of Yi's greatest accomplishments was resurrecting and improving the turtle ship (Korean: 거북선; Chinese: 龜船). With his creative mind and the support of his subordinates, Yi was able to devise the geobukseon, or Turtle Ship. Contrary to popular belief, the turtle ship was not actually invented by Admiral Yi; rather, he improved upon an older design that had been suggested during the reign of King Taejong.

Yi Sun-Shin is famous for having multiple swords. As it is known to date, there are currently six swords related to Chungmugong. There are 1 pair of long swords in Hyeonchungsa Temple, 1 pair of Guido (귀도) and 1 pair of Chamdo (참도), which were presented to Chungmugong as a gift from Ming Dynasty in Tongyeong. In addition, there is a pair of swords called 'Twin Dragon Swords' (쌍룡검), where it is unknown where they were, and there has been a debate over authenticity for a long time. Information on the swords can be seen below.

Admiral Yi Sun-Shin has two statues built to honour him in South Korea. The first is in Sejongno, Gwanghwamun Plaza in Seoul. The second is in Yongdusan Park in Busan, South Korea. 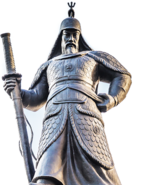 Depictions in other Media 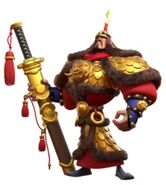