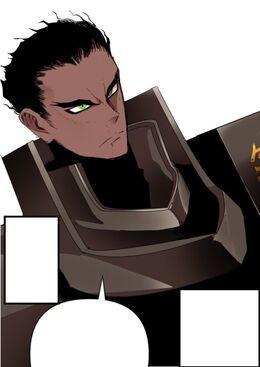 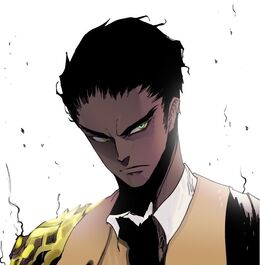 Deleted (eaten by The Dragon of Evil)

Episode 34 (Season 2)
Xiang Yu,[1] also known as the 'Hegemon King'[1] and the 'Strongest Warrior of Giga',[2] was a member of the Giga Empire. He was a member of Han Sung-Gong's closest aides, The 12 Generals. Among those 12 Generals, he was one of the aces.[1] He is the first known player to hold dual Personal Attributes, an ability he acquired from Giga's experiments. He was also the guardian of Charming Castle.[3]

Xiang Yu was chosen as Giga's representative to battle for the alliance leadership. He battled Dark Land's Heart Heater and even overpowered the dragon knight. Xiang Yu was defeated by The Dragon of Evil, who had completely taken over Heart Heater's body. Eventually, Xiang Yu's head was eaten by The Dragon of Evil, leading to his character being permanently deleted from the game.[4]

Xiang Yu is a tall dark-skinned man with jade green eyes and black hair styled into a slick back.

Whilst in combat, he wears the Black Piebald Horse Set which is a full black plated armour set. He usually wears the classic male Giga uniform albeit a darker theme to it. 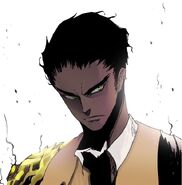 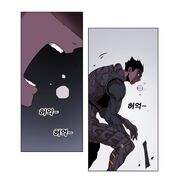 Xiang Yu is a serious person and has a businesslike attitude. He treats everything he does as part of his job and will accomplish it no matter what.

As one of the top aces of Giga's Team 1, Xiang Yu is extremely confident of his abilities and is an extremely capable fighter. He is able to pull off strategies that fool even the likes of Heart Heater and is able to discern his capabilities and the enemies' as well.

Xiang Yu is a direct subordinate and one of the aces of Han Sung-Gong. According to Han Sung-Gong, Xiang Yu has never once disappointed him which led him to being one of his favourite generals.

Xiang Yu and Heart Heater dueled for the title of Captain for their leaders. Xiang Yu insulted when he noticed Heart Heater was underestimating him. Nevertheless, Xiang Yu was able to overwhelmingly defeat Heart Heater and would've killed him so were it not for the intervention of the Dragon of Evil.

Xiang Yu was a very powerful player whose abilities and skill earned him recognition within Giga and led to him being scouted for Team 1. Even Giga's leader, Han Sung-Gong, openly said that Xiang Yu had not disappointed him once.[5] Even amongst Giga's 12 General, he is one of the aces.[1]

Even the watcher of the world, and arguably the strongest being in the whole game, the Dragon of Evil, found Xiang Yu interesting.[6]

Spearmanship: Xiang Yu is extremely adept at using his Spear. He was able to match Heater blow for blow in close combat and even said that he could not feel that much power from Heart Heater's sword. Using his spear, Xiang Yu can jump to great heights and can even avoid Heart Heater's Dragon's Claw from close range. The force from Xiang Yu's spear attack was strong enough to push Heart Heater's feet into the ground and create a mini crater.[5]

Double Casting: Xiang Yu is able to use both javelin throw skills and strike slashes in the same skill.[6]

Dual Wield: Xiang Yu has a special skill that allows him to use his sword and spear at the same time.[6]

Detection Skill: Xiang Yu is able to scan the enemy and calculate their threat level.[5]

Link Skills: Xiang Yu is capable of using powerful link skills. They are strong enough to even impress Heart Heater.[5]

Dragon Specialist: Xiang Yu is extremely confident in dealing with dragons. Due to equipping the full Black Piebald Horse Set, with items all made up of dragon materials, Xiang Yu has an overwhelming advantage when facing off against people who use Dragon related skills and mana.[6]

Xiang Yu's personal attribute is based on a legendary Chinese General of the same name, Xiang Yu, the Hegemon-King of Western Chu. Xiang Yu enables Xiang Yu's combat stats to increase by five times. He was able to evenly duel with a Heart Heater that was using the Dragon of Evil's mana and even overpower the Dragon Knight.[6]

Xiang Yu can use skill based on the Song of Gaixia, a poem the real Xiang Yu recited as he parted from his lover Woo-Hee by death.[6]

Enhanced Spearmanship: Xiang Yu is able to duel Heart Heater who was using the Dragon of Evil's mana. Their weapons clashing caused the air around them to ring.[6] His spearmanship was incredibly strong and swift as he instantly split apart and defeated three giga high rankers with a few swings of his spear.[8]

Enhanced Swordsmanship: Xiang Yu's sword strike was powerful enough to cut through Heart Heater's clothes, his skin, his ribs and even his lungs. It would have cleaved Heart Heater in two were it not for the Dragon of Evil's interference.[6]

Enhanced Speed and Agility: Xiang Yu was able to dodge Heart Heater's North Piercing Wind and even get behind him to deliver a critical hit.[6] Xiang Yu was so fast that he dodged all of the six high rankers attacks at once as he and Heart Heater made a dash for Zhuge Kongming[8].

Giga had a top secret project where they copied and overlayed personal attributes on top of each other. The success rate of that top secret project was below 0.1%, but the first successful case was born out of the odds was Xiang Yu. When Lu Bu was at Giga, he took a part in different tests and experiments. Dark theorizes that this technology had similarities to Nightmare[7]

After opening the double personal attribute, Xiang Yu grows a pair of black horns with the motif of the real Lu Bu's pheasant tails.[7] A giant Avatar that looks like a combination of Lu Bu and Xiang Yu is behind Xiang Yu. The giant Avatar is controlled by Xiang Yu and wields a sword of its own.[7][9]

In this form, Xiang Yu stats has already surpassed All-Stat and reached the stage of transcendence. Xiang Yu is able to push his items abilities to the limit in this form and overlap his skills on layers to mobilise his combat capabilities.[7]

Overwhelming Attack Power: Each of Xiang Yu's blows in this form are a high degree of skills that destroys a mountain. A slash from his sword had enough power to reach the sky.[7]

Overwhelming Attack Speed: Xiang Yu's attack speed was incredibly fast as he was able to strike both Sasaki Kojiro and Miyamoto Musashi, who moved at an incredible speed that they appeared as a streak of light, at the same time and defeated them in one hit without seeming to have moved an inch of his body.[10]

Incredible Defense: Xiang Yu is able to defend against multiple attacks from the three high rankers, Miyamoto Musashi, Sasaki Kojiro, and Beast Form Im Kkeokjeong all at the same time. [10]

After it is decided by the 4 Guild Leaders that a duel between Giga and Dark Land will decide the alliance Leader, Han Sung-Gong picks Xiang Yu to represent Giga in the duel.[1]

Xiang Yu confidently steps up and changes to his combat gear. He cracks his fingers to indicate his readiness. Dacon is summoned to referee the fight between him and Heart Heater. They both start to fight and charged at each other head on. Xiang Yu gives Heart Heater a compliment regarding his powers as Heart Heaters does the same for him.

After Heart Heater used the Dragon of Evil's mana, Xiang Yu remained undaunted and used his buffing skill, Strength Uproots Mountains, Spirit Covers World, immensely boosting his combat stats by fivefold. They both fight to a standstill until Xiang Yu broke it by using a clever strategy that fooled Heart Heater, using his spear as a distraction and dashing in to strike Heart Heater. Before Xiang Yu could even penetrate Heart Heater's heart, he trembled in fear when he felt the Dragon of Evil's watchful gaze and immediately backed away.

'패왕' (hanja: 覇王) is the title of Xiang Yu in the series and is based on his real life counterparts title. '覇' literally translates to 'overlod' (historical), 'hegemon', 'tyrant'. It can also mean 'supreme' based on the Japanese Kanji. '王' simply translates to 'King', 'monarch'.

LINE Webtoon translates '패왕' as 'Supreme King'. Strictly speaking, LINE Webtoon's translation is not incorrect based on the translations of the word as seen above, but the most common English translation of '패왕' is 'Hegemon King', hence why it has been used for this wiki.