Wheat Field View is a current member of the Grass Roots Guild and is a painting magician.

Wheat Field View has an overall cartoonish look to her. Large eyes, small red nose, small mouth, and a small red swirling circle on her cheeks. She wears a large white cap, an orange scarf and a white and orange outfit. 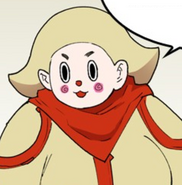 Not much has been shown of her but she is loyal to the guild.

Wheat Field View is on good terms and relations with all of the Grass Roots Guild.

As Painting Magician, Wheat Field View is a capable binder as her spell is capable of rooting an Imoogi in place.

Wheat Field View is first introduced into the story by subjugating imoogis alongside the grass root's guild near their home base, Castle Nario.[1]

She briefly appears again in the AE series, discussing with Cocomori who asks her to give the potions to the injured Tempest and Drip soup, she realised and asked Coco that aren't these potions for Bibi's eyes.[2]

During the fight of the Grass Roots Union against Nightmarized Ruud Ra Kan, the Best Swordsman activates his conceptual magic, along with a flash showing Wheat Field running to the Best Swordsman to warn of him about the spy and the near defeat of Choco Bibi's unit[3]