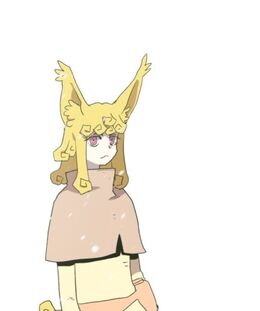 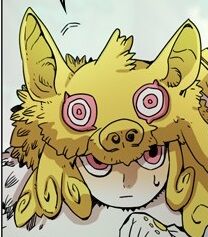 Episode 29
Werewolf is a student in Lucid High, a member of Dark Land and Team Medusa. In the first season, she competed in The last ever Combat Tournament as part of Team Medusa. Her team was knocked out of the Siege Round by Team Open Your Mouth, Here Comes the Healing.[1]

Along with Medusa and Vamp, she joined Dark Land after The Combat Tournament concluded.[2]

During the two year time skip, she joined Lucid High and is part of class 4 along with Dark, Lu Bu, and Chota.[3]

Werewolf is a short girl with yellow neck length curly hair, pink eyes, and a large yellow fluffy tail. She used to wear a yellow wolf fur helmet, a white mane, white jacket, white gloves with the markings of a paw, and fur boots. 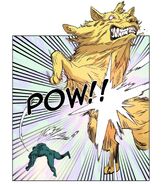 Little was seen of Wolf in the first part of the series although she was confident in her own skills, which led to her almost costing her team a place in the Subjugation Round. She seems to possess a mischievous streak as she also wanted to drink alcohol after completing the Siege Round, but she was denied this by God of Combat which left her depressed.[4]

She is insecure about her height as seen when she reprimanded Dark for calling her short.[2]

Medusa was the de-facto leader of Team Medusa that competed in the Combat Tournament. The exact nature of their relationship is unknown, but they seem to get along as they were in the same team. Medusa criticized Wolf for almost coming last in the Preliminary Round, with the nervous Wolf saying they were 4 spots left.[4]

Werewolf and Vamp were both members of Team Medusa, as they were a team, they got along with with each other. They even came to Dark Land together and settled there with Medusa.

Wolf and Dark were both contestants in the last ever Combat Tournament. Despite being in the same vicinity with one another, they had no direct interaction with each other. After the Combat Tournament concluded, Wolf joined Dark Land along with her party. On their first ever interaction, she rebuked Dark for calling her short, citing that he himself was not tall.[2]

Over the next two years, they developed a strong friendship. They both joined Lucid High and are in the same class and assignment group.[3] Their friendship is strong enough for Dark to tell Wolf about his loss to Stone, the current rank no.1 player.[5] She is aware of how powerful he is and knows when he is not fighting properly. She is not afraid of reprimanding Dark, like when she rebuked him for wanting to ditch Chota for being late, calling him a 'selfish bastard' (Korean: 이기적인 놈).[3] She is also not afraid of making jokes at Dark's expense as she giggled when talking about the reason for his hairstyle change.

There wasn't much interaction between the two but Wolf thought she was one tough gal. As part of the same team, they are on good terms.

Wolf and Chota are both students of Lucid High and are in the same class and assignment group. Wolf and Lu Bu invited the new student, Chota, to join their assignment group because Dark insisted on having one more person. Wolf is protective over Chota. She reprimanded Dark when he tried to ditch Chota for being late.[3]

Wolf and Lu bu were both contestants in the last ever Combat Tournament. They were never shown having a direct interaction with each other. Two years later, they are both students of Lucid High and are in the same class and assignment group. Lu Bu and Wolf seem to be on good terms with each other and they both reprimand Dark and various points, especially with regards to his cold attitude.[3]

Werewolf is a proficient swordswoman as she was part of a party that reached the Siege Round of the last ever Combat Tournament and she was strong enough to become a part of Dark's party without having to go through a trial like Chota.[1] She improved her personal attribute of the Beastkin Tribe to become an unpredictable attacker, mainly using Fur Reinforcement, her special skill.

She is an excellent fighter as her combat abilities were shown during her battle with Chota against the Reinforced Dummy Nightmares, of Han Gun-Ho. She was able to destroy all of the reinforced dummies with single skill despite said dummies possessing good defenses. Before she did so, she was able to easily evade their attacks with her small form and even defeat them all with a single swing of her sword.

Fur Reinforcement: Werewolf's skill-type personal attribute that allows her to change forms in accordance to her beastkin tribe, which is Wolf.

Beast Mode: Wolf was able to transform into a giant yellow werewolf during the Siege Round. This presumably boosted her stats and physical capabilities. Unfortunately in this mode, she was defeated by a single blow from Top Baldhead, which prompted Choco to say that the transformation "didn't do any good".[6] However, the complaint suggested that the transformation was indeed strong and worked before.

Furry-Furry Mode: Werewolf's attacking mode when she is in the offensive, her fur becomes elastic; able to resume her normal shape spontaneously after contraction, dilatation, or distortion, and enabling her to transform into a smaller form.

Werewolf's class is Swordsman, a class that allows her to use sword-related skills and utilize the Sword Energy resource. The class also allows her to use the Ego Swords however she doesn't possess one of her own.

Swordsmanship: Werewolf is stated to be an excellent swordswoman as she was a part of Dark's party of powerful players. With a single swing of her sword, she was able to decapitate the heads of multiple reinforced dummy Nightmares, who themselves possess good defenses.

Her team passed the Subjugation Round and reached the Siege Round, where they were put up against Team Open Your Mouth, Here Comes the Heal.[9]

During the Siege Round match against Team Open Your Mouth, Here Comes the Heal, Wolf transformed into a giant werewolf but was knocked into her team's Castle Wall after a blow from Top Baldhead. Her HP fell to Zero and she died. Her team was defeated soon after her death and knocked out of the tournament.[6]

After her team saw the Dark Land advertisement posters, they headed to Dark Land along with a load of other travelling parties. They were attacked by Mana Flies on the way to Dark Land. The travelling party defeated the Mana flies and met up with Dark and Heart Heater. Dark makes a quip about Wolf's height wish caused her to rebuke him and called him out on his own height. She became an official member of Dark Land soon after that.[2]

Wolf and Lu Bu both wait for Dark at the entrance of Dark Land. Dark arrives late and tells them to ditch Chota, the new student, for being late which causes Wolf to rebuke him and call him a "selfish bastard". Chota logs in to meet the group. After Lu Bu and Dark defeat the nightmarised monster, they obtain its Nightmare Core. Chota thanks Dark for letting him join the group and Dark calls him "cringy". Wolf calls a Tsundere, saying he acts cold but really cares about others. Wolf asks Chota why his level is so low and Chota explains his predicament. The group is attacked by Gurland and avoid his attack but drop the Nightmare Core.[3]

Dark faces Gurland and defeats his Nightmare Soldeirs and Wolf says Dark is the current rank 3. Gurland is not completely defeated and ends up taking over Chota's body and nightmarising him.[10] Wolf watches as Dark engages the recovered Gurland. After Gurland realises he can't win, Gurland nightmarises the surrounding wild life and orders them to attack Dark Land's Castle, which caused Wolf to worry. Sora returns and destroys the Nightmare Servants and eventually splits Gurland in half.[11][12]

Chota is separated from Gurland and is quarantined by Heart Heater's Anti-Nightmare Quarantine Device. She returns to Dark Land with her group and listens to Hear Heater's news about Nightmare and the fall of Lakiren Castle. Rim informs the group that a VVIP is coming for a meeting with Dark, and Scott Yang walks in asking if they heard about the idol incident.[13]