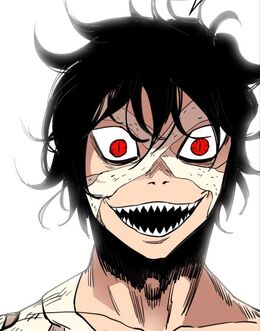 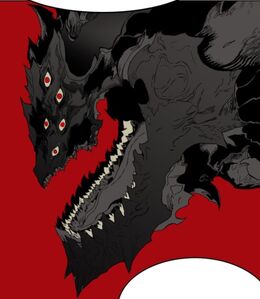 The Dragon of Evil also known as the Dragon of Darkness,[1] is one of the Prime Dragons in Lucid Adventure. He is one of the two Dragons created by Han Gun-Jae to act as a balance to The Four Gods[1] and his role is The Watcher of the World.[2]

He is the creator of the Dragon Knight Class and the Master of Dragon Mountain. The Dragon of Evil's purpose is to lead Team Dark to see the Lucid Adventure's ending.[3]

In his humanoid form, the Dragon of Evil has messy black hair, red eyes, and shark-like teeth. He is shown to be half naked in all his appearances, wearing only blue ripped jeans, no shoes, and wearing bandages around his head to his right arm. His skin starts to darken around his hands and feet as well.

According to Dark, he looked like a kid in his puberty and an anime character due to the bandages around his arm.

In his dragon form, he is a gargantuan black dragon with multiple red eyes across his face. 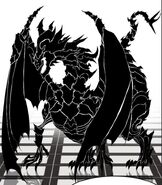 The Dragon of Evil's Dragon Form 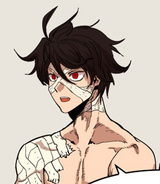 Dragon of Evil telling Hardcore Leveling Warrior to discover the answer for himself.

Dragon of Evil smiling as he thinks of creating the Dragon Knights.

The Dragon of Evil is playful of everything, finding Dark's tantrum against him amusing and making a new class called the Dragon Knights because he was fond of the Ancient Knights that fought the Demons. He had fun whilst observing Heart Heater fight for his life against Xiang Yu even when Heart Heater made a blunder and said that Xiang Yu got him good. When he finally possessed Heart Heater, he had toyed with Xiang Yu, dodging and blocking one of Xiang Yu's attack with his teeth.

However, he has a more serious side. First becoming angry when Xiang Yu almost killed Heart Heater and scaring the former away, the second when he had asked Xiang Yu a serious question and proceeded to kill him for picking the wrong answer, and the third when he had told Dacon, The Combat Npc, that she could do nothing to him now that the Gods are gone and proceeded to make Giga's army, including Sam Han to bend the knee against him for attempting to attack him.

He's also the type to hide his care for other people and doesn't like being cared for as shown he said that in the past, Heart Heater cared about the Dragon of Evil, not knowing his place.

As an Ancient Dragon, the Dragon of Evil is Redinaia's ancestor as it is said that all ancient dragons come from him and the Dragon of Light.[4] Although the relationship shown between them are shown to be master-apprentice.

Redinaea highly respects him as her master, showing immediate concern when she accidentally stomped her master's hellfire seedlings whilst in a fight with No Name.[5]

Heart Heater is the Dragon of Evil's most favorite student, giving him the preferential treatment amongst his apprentices according to Paron, and caring about him despite Heart Heater not attending his birthday or his apprentices' funerals.[6]

The Dragon of Evil is in charge of Heart Heater's very own life, deciding when his death-day will be. He had lightly scolded Heart Heater for being snaky, noticing many things and caring about him, not knowing his place.[2]

They have an ordinary master-apprentice relationship. Paron highly respects the Dragon of Evil as he tried to kill Dark for disrespecting his master.

As the appointed guide of Team Dark, the Dragon of Evil wanted to meet and test Team Dark under the context of 'punishing' Heart Heater. After they have passed the trial, the Dragon of Evil regarded them as the promised ones stating that they're different from ordinary people.[3]

During the trial, he regarded Dark as someone who thinks everything is easy and everyone can be beaten even though he'll never admit it.[8]

Soon after Dark and his friends passed the trial, The Dragon of Evil reluctantly acknowledged Dark as Heart Heater's master even awarding them a title, 'Cursed Hero', after Dark demanded a reward.[3]

At first when Sora bravely accepted the Dragon of Evil's trial, there was not much interaction between them. The Dragon of Evil called her an innocent child, a fool who believes that everything can be achieved with pure hard worked regardless of the nature of the world when she was undergoing her trial though seemingly interested by calling her an 'unknown potential'.[8]

When she came to Dragon Mountain, he noticed her wandering around and invited her to his home. Dragon of Evil thought that she was a daring human for desiring to devour his tail, the pride of Dragons, calling her reckless despite knowing full well that she'll perish from Lucid Adventure if he devours her. Though he tested and frightened her, all he needed was her undaunted answer to his question of whether she truly wanted to devour his flesh. Once she did, he called her impressive and gave her his tail without hesitation.[9]

Sora is the first human that the Dragon of Evil called by their name, thanking her for giving him food made after the real world ones.[9]

The Dragon of Light is the other prime Dragon that was created to balance The Gods. They are not on good terms and have been fighting each other for over a millennium. The Dragon of Evil holds a grudge against her for wounding him, calling her a "bitch". After the Dragon of Evil, who had taken over Heart Heater's body completely, forced Giga to kneel before him, the Dragon of Light appeared on the battlefield in the form of her clone and reiterated that they were the balancers of the world.[10] They stared at each other for quite some time as if the world stood still before the silence was broken by Sora and Hephai.[10]

Spirit of the Mirror

The Dragon of Evil sealed the Spirit of the Mirror as punishment for messing with his lady.[11]

Not much is known about the relations between him and Roy Han, though it can be assumed that he respects him as the Absolute God of Lucid Adventure as he is his creator.[6]

“...He has a different kind of strength to The Dragon of Light...He is a terrifying guy..”
― Stone

Despite his heavily wounded state from his millennium battle with the Dragon of Light, his reputation is still dangerous enough for Giga's Security Team to abandon their pursuit of Hardcore Leveling Warrior in Dragon Mountain for fear of encountering him.[14]The Dragon of Evil sealed the powerful being Spirit of the Mirror in The Cave of Atonement.[11]

Heart Heater feared The Dragon of Evil taking over his body because of the amount of destruction it would cause and he was proven correct. After taking control of Heart Heater's Body, The Dragon of Evil was able to easily subdue and eventually kill Xiang Yu, despite the latter specialising in fighting Dragons and wielding Dual Personal Attributes.

Such is the transcendence of The Dragon of Evil, that he was able to stop Dacon, The NPC of Combat, from stopping his fight with Xiang Yu despite Giga forfeiting the match. Despite Dacon's protest, citing that The Dragon of Evil is going against the will of the world, The Evil Dragon simply scuffed at her and said that she could not stop him now that The Gods have gone.[15]

“What are you doing you idiots!!! Do you all wish to be destroyed here? Wake up!!”
― Stone

“The Dragons began to move.”
― Narrator

Ever since the Dragon of Evil and the Dragon of Light fully recovered, they began to move. Their sudden activity caused four castles of New Nightmare to have been destroyed and more than 300 Nightmares have perished under their onslaught. Such is their tremendous power that their clear and distinctive mana could be felt from thousands of miles away as No Name sensed it from Lakiren Castle.[16][17]

A Dragon Sees All: The Dragon of Evil is able to see and read the thoughts of any person he chooses. He is also able to see the real life appearances of each player in the real world as well.

A vivid description of this fear was shown when the Dragon of Evil merely asked if she was sure on devouring his flesh. Sora felt immense fear when the eye of the Dragon of Evil stared at her, it felt as if her whole body was burning from both inside and out.[9]

Class Creation <Dragon Knights>: The Dragon of Evil had the power to create his own class in Lucid Adventure known as the Dragon Knights. He created them after taking a liking to the Ancient Knights.

Player Character Deletion: Those who are devoured by The Dragon of Evil can never return to Lucid Adventure. If a player is eaten by The Evil Dragon, their game character is permanently terminated.[7]

The Dragons of Good and Evil fought for a millennium, leaving magic and technology in the world. At some point during their battle the Dragon of Evil received and injury on his right arm from the Dragon of Light. He covered the wounds with bandages.[18][19]

During the war between the humans and demons, the Ancient Knights brought the scattered humans together as one and led them to victory against the demons.

“...Knights, how interesting...Should I make one too?”

The Dragon of Evil decides to take an eye from Heart Heater to 'monitor' him. He tells Heart Heater not to even think about using his power without consent. Heart Heater smiles and tells the Evil Dragon he will return when he finds 'her'.[20]

Trial of a Dragon Arc

The Dragon of Evil invites Sora to come and meet him in his lair sending Paron to bring her. When she arrive he notices that she has grown stronger then ask what her business is with him but he already knows, she has come for his tail. He's surprised that a she is this reckless and ask her again inducing a intense fear effect over her to test if she'll give into the fear. She passes impressing the dragon who rips off his tail handing it over to her as a reward. He turns to go get some sleep thinking to himself if the witch is happy that all her prophecies have became true. Sora ask if he will eat with her but he's not interested at first but Sora hands him some snacks which he tries out of curiosity. He enjoys these snacks and thanks Sora for them.

The Dragon of Evil is sitting upon his mountain of coins clenching his fist as he says he's ready to fight now as Heart Heater arrives and they head out to make their move.

To ensure there is consistency between the Dragon of Light, the original and proper translation, Dragon of Evil will be used for this wiki.