Episode 10
Totoras was a Water Castle[1] and was the Third Castle[1] of the Giga Empire in Lucid Adventure.

It was bombarded and destroyed alongside other castles by the Nightmarized War Weapons of Giga Empire.

It is a large castle that is stationed around the ocean and was Light's main base of operations. This was where Light observed the matches of the Combat Tournament before the PvP Round and where he is being treated for his current wounds.

Totoras was first shown when Manager Jang Kim reported to Light about the failure of Dark's in-game assassination where Light also makes his first appearance.

A clinic is shown within Totoras Castle where Light undergoes treatment from the wound he received from a divine skill.

The castle is shown once again as Veganic makes a report to Light under Han Gun-Ho's orders regarding Lakiren Castle. 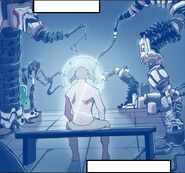