“I definitely warned you, that I have a habit of hitting back everything that comes my way....”
― Thunder[1]

Thunder is the Cartoon Character Type Personal Attribute of Akira and Nightmare Akira.

A power that grants it's user baseball bat skills and abilities based on the main character of the Sindorim webtoon, Thunder.

Baseball Bat Proficiency: Just like Thunder, Both Akira and Nightmare Akira are able to demonstrate brutal aptitude and great proficiency in using bats to inflict heavy blunt force damage and trauma, making them very dangerous in close quarters combat. They can also break down structures and take out heavily armoured enemies.

'Main Character' Attribute ('주인공' 특성,  'ju-ingong' teugseong)[3]: Users of this attribute have the 'Main Character' attribute presumably because Thunder is the the main protagonist of his own webtoon. The exact effect of this was never given but Coma questioned if the effect of the attribute is what made Nightmare Akira confident enough to take on both Him and Elena alone.[3] 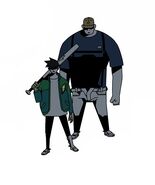 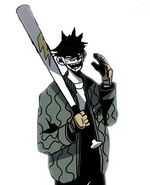 Thunder's with his bat 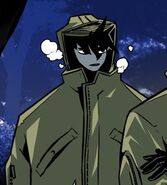 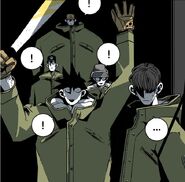 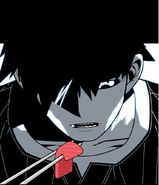 Thunder with his new bat 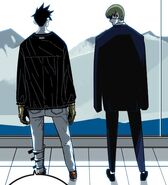 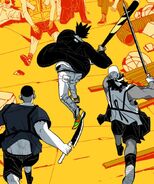 Thunder fighting with his crew

Thunder flipping a truck with a bat swing 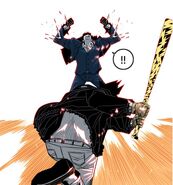 Six years ago, a disaster occurred that left the world covered in radiation. A shelter built under the subway of Seoul which only 500 people can enter everyday was built. It is an underground city, which took a year to build and was built under the Sindorim station and was called "Sindorim". It is said that the underground city was naturally called 'Sindorim' because it was built on the basis of Sindorim Station, which has the largest floating population.

The world above ground was renamed "hell". The wrath of the people left behind inevitably led to an increase in crime. To control the increasing crime, the Sindorim government put bounties on people's heads. Most people have to wear gas masks due to the effects of the radiations except for those known as "kiz".

'Kiz' (키즈, kijeu) (Lit. Kids) are those who have gained superhuman powers as well as the fact that their bodies have changed due to radiation. This power comes only to teenagers before their growth plate are closed. They call themselves the '피도 안마른녀석들'. Female Kiz are extremely small in number compared to the males with the ratio being 1 to 9. According to Heart heater, most of them didn't survive the difficult physical conditions due to their weaker constitutions.

Their appearances at the time of exposure is almost always fixed and their age is written as 'Age Before the Disaster + Years after exposure'. For example, Thunder was 18 when the disaster happened, six years later, his age is given as '18+6'. 1 year later in season 2, his age is '18+7'.

It is said that Kiz skills do not grow after their abilities blossom but their competency and ability to utilise them can grow. so they can become stronger as their actual fighting capabilities increase through experience. This was believed to be the norm until it was shattered by both Thunder and Ttaeng Jeon, whose actual physical abilities grew as time went on.

Six years ago, before the world was covered in radiation, Thunder was a youth baseball player at the national level. He was a catcher. After the 'disaster' he became one of the 'Kiz' whose bodies were strengthened by the radiation and has gone on to strengthen his ability as a batter. He is part of a group of Kiz collectively known as 'The Money Crazed Bastards' (돈에 환장한 놈들) (Lit. Bastards who are crazy about money).

When he moved with Jumbo to complete a job, he referred to the duo as the the "Youth National Baseball Battery Hunters" (청소년 국대 야구 배터리 시냥꾼)[1] (Battery is a baseball term that refers to a combination of a pitcher and a catcher in a team, and the duo's combined productiveness. In the case of Thunder and Jumbo, Jumbo is the pitcher and Thunder is the catcher.

Unlike other 'Kiz' who have their growths capped, Thunder has the ability to grow and become stronger.

Thunder uses baseball bats with a lightning insignia as his main weapons and he has the ability to deflect multiple bullets at point blank range with them. By the second part, a single swing of a bat from Thunder could send a speeding truck flying off the road.

This is a list of skills used by Thunder. 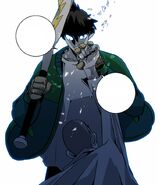 ...which Thunder neutralises with Catcher- Catch

Thunder getting into an attack stance...

...and then hitting Big Bear with a Triple

Thunder getting in a stance...

...and using Slug on Big Bear