Unknown (rumoured to be over 1000 years old)

The Witch is a mysterious supernatural being that looks like a little girl.[1] "Monster", "Angel", "Demon", "Immortal", "God's Messenger", "Alien", are the word used to refer "It" in the real world.[1] She is currently known as The Witch.[1] Some claim that she has lived for over 1000 years while others say she won a bet against God and is now immortal.[1]

With the aid of The God's Toy, she helped Han Gun-Jae create Lucid Adventure.[1]

The Witch is a mysterious being that looks like a little girl. She is a young girl with long blonde hair styled into a pigtail and glowing mint and lime green eyes.

She has worn multiple casual clothes throughout her appearances, wearing only a black bra and cerulean short shorts in her first one. She also previously wore a caramel coat with long sleeved light blue collar shirt and a grey shirt underneath and tucked inside of her lead colored pants and brown boots.

Now, she wears a light-colored puffer jacket with a design similar to a louis vuitton one, an orange turtleneck sweater underneath, black pants and black sneakers. 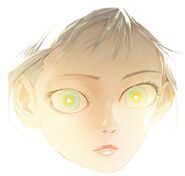 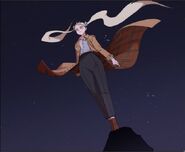 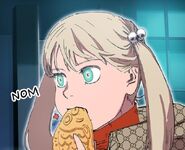 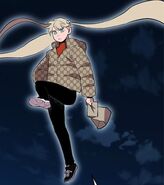 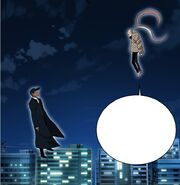 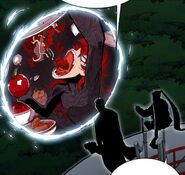 The Witch is a very mysterious being as she is the only hint of the Real World Gods. She is a bit childish as she plays with figurines all the time, even playing with Han Gun-Jae and Dark albeit unbeknownst to the latter, and is always shown hanging out at some restaurant. She is serious and avaricious as she is well known in offering something otherworldly for a huge amount of money. She is even referred to as the incarnation of desire by The Angel.

She is a straightforward being as she immediately dragged Han Gun-Jae into space and showed him how to create a world. She is a bit playful as well as she saved Dark from falling off a cliff at the cost of him seeing ghosts because he was one of the people to see the ending of Lucid Adventure and she checked up on Gong Won-Ho when he was dropped into the sea in a barrel.

The Witch hates people who talk to her whilst she's eating and also those who follow her around.

The Witch first approached Han Gun-Jae in the form of a bird, saying that he was greedy for wanting to make a new world and proposed him a deal that only he can afford. When they met in person at some isolated restaurant, she started the conversation by talking about the toys one could get from the restaurant. When Han Gun-Jae tried to leave, the Witch dragged him into space to create a new world. After seeing that Han Gun-Jae satisfied, she returned him and told him to bring the money tomorrow. They maintained a business relationship in creating Lucid Adventure even playing together with Dark.

The Witch met Zero when the latter was a child. The two didn't have any interaction but she was one of the first people to have witnessed Zero when she was innocent.

The Witch had chosen the three of them as the ones who'll see the ending of the game and so, she cannot let them die. She had saved Dark when he was a child and assumingly saved Hardcore Leveling Warrior as she was there when he was dropped into the ocean. She wanted Hardcore Leveling Warrior to lose his attachment to a fake world like Lucid and to accept reality. She didn't have any interactions with Sora but chose her regardless.

She is constantly annoyed by their insistent nagging regarding her activities.

The Witch and the Angel have known each other for a long time although the Witch disliked him following or chasing after her all the time since he's always there to tell her about the nagging of the "high ups". She tried to ask him a question regarding red bean past or custard cream and intended to use it as an excuse to run away if he chooses the wrong answer.

She was surprised that the Angel got the correct answer and called him "pretty smart" to which the Angel said that this is a piece of cake for him as he had chased after her for years, calling her the "incarnation of desire". She also teased him to his face that she hated his nagging and wished he was dead.

Possession: The Witch is able to possess both character and the person themselves in Lucid Adventure and in the Real World as she saved Dark from dying in the real world by giving him the otherworldly power of her own temporarily.

Flight: The Witch is able to fly in both worlds.

Summon: The Witch is able to spawn anything as shown when she spawned a blue bird from the tip of her fingers which she sent to Han Gun-Jae to relay her deal to him in the real world.

Portal Creation: The Witch is able to create an invisible portal that allows her to watch over the residents of Lucid Adventure.

Prophecy Construction: The Witch is able to create prophecies that are foretold to happen.

The Witch created a bird from her fingers in order to entice Han Gun-Jae into making a deal with her in creating a world for his dream and told him to come to XDonalds alone in order to discuss terms. She then met and had a conversation with Han Gun-Jae in the restaurant, opening up with a topic regarding toys. When Han Gun-Jae attempted to leave as he thought she being ridiculous, she immediately told and showed him a toy that could create a world.

The Witch snapped a "picture" of him with the toy, dragging his consciousness to an unknown vast space as she follows him soon after. After that, she then explained what's happening and showed him how to create a world using the toy and his mind, stating after that the world he had created may look fake but is actually real. After seeing Han Gun-Jae so satisfied, she took his expression as a 'yes' to her deal, adding on that it costs tons to be a god though this was only half. She then returns his consciousness to his body, disappearing immediately as she told him to get her money ready.

This was not the last of their interaction as she not only helped him develop his world, she had even played with him and his grandson, Dark, albeit unbeknownst to Dark himself. When Dark suddenly collapsed, Han Gun-Jae shouted at her to do something to which the Witch told him to be quiet as she proceeds to save Dark in the real world. She noticed that Dark was drugged and possessed him, temporarily granting him supernatural power which shocked Han Sung-Hyun and unknowingly drove them both to a cliff. The Witch saved Dark's life by landing his body on top of a branch right by the cliff.

The Trial of a Dragon

During the Trial of the Dragon Arc, the Witch appeared when the Dragon of Evil asked her if the trial he had put Team Dark through was what she wanted to which she approved as she tells him that the reason she put him there was to guide them. She then left a forboding warning to Hardcore Leveling Warrior regarding his obsession with Lucid Adventure.

The Witch appeared in the epilogue of the story, deciding what she should do as she looks into the distance after Hardcore Leveling Warrior and Lila are thrown into the ocean.

The Witch is shown being followed by the Angel through a crowd in Gangnam, South Korea, however the Witch noticed him and immediately left the scene. The Angel pursued after her and flew to the air where he questioned the Witch but was kicked in the face. The Witch then stated her dislike of him following her and asked him a question whether he prefers red bean paste or custard cream to which the Angel knew the answer already and chose both.

The Witch was surprised by his answer to which the Angel said it was a piece of cake. The two had a conversation regarding the Witch's activities in the Real World and her use of low leveled OOPARTS. He was extremely worried when the Witch explained her actions, saying that the prank is too much and that the two worlds might invade each other to which the Witch reassured him that they wouldn't as she put a safety device in case it happens.

After the two discussed the progress of the other world, the Angel then leaves as he has a rough idea on what is currently happening. Before he left, he left the Witch with a warning from the high ups that they won't let her off like they did for The Forza and Forda Incident if another disaster from her takes place.

The Witch complained about the nagging of the high ups after the Angel left and said that if the humans refuse to choose the Real World over the other world then it should be left to collapse.