The Memory of the Wish-Fulfilling Gem

Hardcore Leveling Warrior
The Memory of Cintamani is the head ornament of The Golden Armor set.

The effects of the item are currently unknown.

During the PvP Round Semifinals, Hardcore Leveling Warrior stated that the item would give him access to all the 999 skills he had access to when he was the Rank No.1 Player.[2]

Hardcore Leveling Warrior called this the most important item he had when he was the Rank No.1 Player.[3]

After being paralyzed by the Paralysis Sword, Hardcore Leveling Warrior had The Memory of Cintamani and the rest of his items taken from him by Zero.[1]

At some point before the PvP Round, Heart Heater bought The Memory of Cintamani from a wanderer. [2] 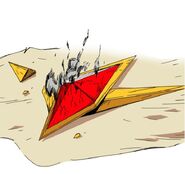 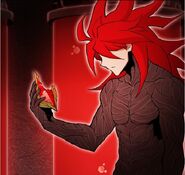 Line Webtoon correctly translated this as 'Memory of Cintamani' in Episode 1. However, they have since called it 'The Memory of the Dragon Pearl' since Episode 143. The reason for this is most likely because in Korean mythology, a Korean Dragons are depicted carrying the Yeouiju (this is explained in more detail in the Notes & Trivia section).

Ultimately, this wiki will always go with the true and original meaning, so 'Memory of Cintamani' has been retained.

Cintamani (Korean:여의주, romaja: yeouiju) is a mythical wish-fulfilling jewel within both Hindu and Buddhist traditions, said by some to be the equivalent of the philosopher's stone in Western alchemy.

In The Digital Dictionary of Buddhism's ruyizhu, it is said that a 'maṇi'-jewel (or magical jewel), which manifests whatever one wishes for (Skt. 'maṇi', 'cintā-maṇi', 'cintāmaṇi-ratna'). According to one's desires, treasures, clothing and food can be manifested, while sickness and suffering can be removed, water can be purified, etc. It is a metaphor for the teachings and virtues of the Buddha. ... Said to be obtained from the dragon-king of the sea, or the head of the great fish, Makara, or the relics of a Buddha.

The Korean dragon is very occasionally may be depicted as carrying the Yeouiju in its claws or its mouth. It was said that whoever could wield the Yeouiju was blessed with the abilities of omnipotence and creation at will.