The Gods were the most powerful beings in the world of Lucid Adventure.

Zero was the first 'God' created when Roy Han's program merged with the God's Toy to create Lucid Adventure. The creator's body , Roy Han, was soon created afterwards and he was made the Almighty God of Lucid Adventure.

After an unspecified time, Roy Han created the other 'Gods' that include the God of Combat, God of Death, the Three Goddesses of Fate and God of Blessings. They are the highest level of authority in Lucid Adventure bar Roy Han hismelf. They refer to him as 'Father' as he is their creator.[1] It appears that the Gods have their own messenger as Roy Han was able to talk to them directly during Giga's invasion of Yopi Land.[1]

The Gods reside in the Divine Realm and seem to not intervene in 'wordy' matters except 'something big comes up'.[1] The Gods were designed to die if they fight each other.[2]

The Gods appear to be immortal. Although the Gods are extremely powerful, it is implied that they can die.

As of the PvP Round, the Current iteration of the Combat Tournament will decide the next God as Roy Han is close to death. Each of the 'Gods' picked a team in the tournament to back.

As The Gods of Lucid Adventure, each of the Gods possess immeasurable power. Their power is so great that even Giga were told to 'avoid' them by The Emperor, Sam Han.[3]

The can all use 'Divine Skills' that are exceedingly powerful and can cause mountain level disasters.[4][5]

As he was dying, Roy Han used the God messenger to contact the Gods and they appeared before him to discuss his successor as the next 'God' of Lucid Adventure. The one of the Three Goddessess of Destiny used Time Space Freeze to stop the war between Giga and Yopi Land. 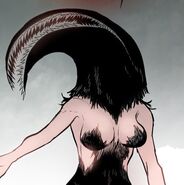 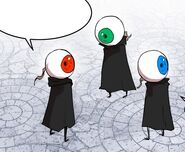 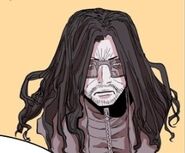 Retrieved from "https://hardcorelevelingwarrior.fandom.com/wiki/The_Gods?oldid=26585"
Community content is available under CC-BY-SA unless otherwise noted.