The Dagger of Doom's Day

The Dagger of Doom's Day (Speculative) is one of the Swords created by The Master Blacksmith, Zero. It is a weapon used by Nathan Han.

The Sword causes eternal death if used to stab a player. It deletes players from Lucid Adventure.

Like most of Zero's 'bug' weapons, it leaves a red effect on the stabbed player.

In the early days of Lucid Adventure, Nathan Han used the sword to defeat Sad Smile an just before Sad Smile's character was about to be deleted, he made a contract which forced him under the servitude of Giga.[1] 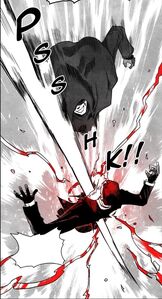 Retrieved from "https://hardcorelevelingwarrior.fandom.com/wiki/The_Dagger_of_Doom%27s_Day?oldid=17340"
Community content is available under CC-BY-SA unless otherwise noted.