The Breath of Death

The Breath of Death was a divine skill used by Zero after absorbing God of Death.

A snout resembling the God of Death's appears in Zero's hand from which Zero fires a powerful gigantic blast that causes destruction.[1]

The skill was capable of destroying a large portion of Tomb of Swords and presumably killed a lot of players.[1] 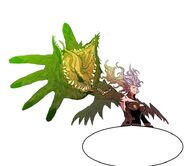 Retrieved from "https://hardcorelevelingwarrior.fandom.com/wiki/The_Breath_of_Death?oldid=17136"
Community content is available under CC-BY-SA unless otherwise noted.