Cha Jin-Hyuk,[2] also known as Tempest in Lucid Adventure,[3] is a member of Grass Roots Guild.

He has worn two different outfits in Lucid Adventure, the first outfit consists of a black fabric suit which he wears under a white crop top and grey cargo pants. Two boxes of ammunition are attached to the torso area of the crop top. A decorative symbol, a yellow cross over a black circle of fabric, can be seen throughout his outfit. Usually, he wore grey bandages around his stomach area under the uniform and wears grey boots and cargo pants.

Now, he wears a new outfit which is a white jacket paired with a white overcoat. His overcoat has black straps which Tempest uses to store his mana bullet canisters. The overcoat has an exposed middle, shaped like a hollow cross. Below the overcoat, he wears a long piece of black fabric that seems to cover both his arms. He has black bandages around his entire midsection, a white belt around his waist, black pants which ends are tucked inside his black boots. 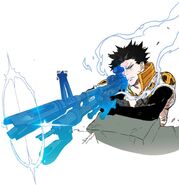 Tempest imbuing his Sniper Rifle with his Holy Attribute

Tempest with a shorter sniper rifle

Tempest with his guild, the Grass Roots 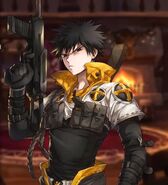 However, he is friendly and cares for his own guildmates very much. He refers to his Guild members by "Bro", and other nicknames and short forms. For example, he refers to Drip Soup as "Soup", Choco Bibi as "Bibi" and Cocomori as "Coco".

Tempest is somewhat hot-headed and impulsive. When his guildmates are in danger, he will not hesitate to jump forwards to protect them or attack the enemy. This can be seen multiple times, from Tempest jumping forwards when Choco Bibi is impaled by Octonash (and consequently being berated by Drip Soup for barging forwards despite being a dealer), Tempest attempting to body block for Choco Bibi as Rigos emerges from Octonash's corpse, and when he self destructs as a last resort.

Tempest and Choco Bibi were both in Zara's Guild. Both of them joined the Grass Roots Guild after Zara's Guild disbanded.

They are seen to be very close to each other, even to the extent of willing to sacrifice themselves for each other. This could be due to their close history, both having been acquaintances and friends since their starting days. Like the rest of Grass Roots, influenced by the way Zara's Guild guild members used to refer to each other, they also refer to each other as "Bro". Tempest also refers to Choco Bibi by his nickname, "Bibi".

In the battle against Octonash, Octonash chooses to attack Choco Bibi as he was the most vulnerable in the team at the moment, having used up most of his mana teleporting the entire team around and being the biggest nuisance due to his ability. Octonash strikes a hole in Choco Bibi's torso, leaving him to bleed out. This causes Tempest to act irrationally, running forwards and shooting at Octonash despite being a far-ranged dealer. Ultimately, Drip Soup pulls him back, berating him.

At the start of the battle against Rigos, Rigos emerges from Octonash's wounds and Rigos's Todish explodes out in a spear-like form, attacking Choco Bibi. Choco Bibi is about to be impaled when Tempest leaps in front of him to shield him from the attack. Choco Bibi, having charged up enough mana for only one person after the battle against Octonash, chooses to teleport Tempest out of the way and gets impaled instead.

Tempest self-destructs to defeat Rigos' Todish, regretting that he did not advance earlier but commenting that he has avenged Choco Bibi and Drip Soup's deaths.

After the Combat Tournament, Choco Bibi's eyes were damaged from overexerting his mana channels. Tempest was focused on finding a way to fix Choco Bibi's eyes, going after 'Renjia', the field boss, after being told by Mage Nutella to retrieve its eyes. He tells Drip Soup that they have "no time to waste" and both of them head off immediately. As Drip Soup presents the glasses to Choco Bibi, both of them are seen injured and covered in bandages. Both of them are eager to see if the glasses work for Choco Bibi.

Drip Soup and Tempest were both part of Team Choco Bibi in the Combat Tournament. They seem to be close friends. Like the rest of Grass Roots, influenced by the way Zara's Guild guild members used to refer to each other, they also refer to each other as "Bro". Tempest also refers to Drip Soup by his nickname, "Soup."

In the battle against Octonash, Drip Soup pulls Tempest back after he jumps in to attack Octonash, berating him.

In the battle against Rigos, Drip Soup dies initially when Rigos emerges from Octonash's wounds. Tempest self-destructs to defeat Rigos' Todish, regretting that he did not advance earlier but commenting that he has avenged Choco Bibi and Drip Soup's deaths.

After the Combat Tournament, Choco Bibi's eyes were damaged from overexerting his mana channels. Tempest was focused on finding a way to fix Choco Bibi's eyes, going after 'Renjia', the field boss, after being told by Mage Nutella to retrieve its eyes. He tells Drip Soup that they have "no time to waste" and both of them head off immediately. As Drip Soup presents the glasses to Choco Bibi, both of them are seen injured and covered in bandages. Both of them are eager to see if the glasses work for Choco Bibi.

Not much interaction is seen between the two of them. Armes, as guild leader, accepted Tempest into the guild (as seen in AE 2: Closed Beta Tester) as he was outside the dungeon Zara's Guild has raided. When someone in the guild teases Tempest and asks him to sing as a "tradition for joining the guild", Armes encourages this.

Tempest is a very proficient marksman, remarked to be well versed in any firearms, from a pistol to a rocket launcher, preferably magical firearms. He appears to use sniper rifles and grenades for the most part and imbues holy power into his firearms and bullets to further increase their overall power.

He is able to summon miniature angels that also wield holy firearms to assist him in combat whether to help him gun down the enemy or have them explode themselves in his opponent's faces, causing large explosions of blue fire. He and Tempest are the only one able to use Divine Weapons from the Divine Realm and Tempest himself is able to summon Divine Weapons through God's Armory all by himself without needing Choco Bibi's teleportation spell for it.[4]

He mastered the perfect subterfuge technique, which is subspace, that guarantees a clean shot. It was his very own combination technique that something only he can pull off.[4]

During his third battle with Nightmare Tempest, Tempest unleashes his True Awakening, the Angel of the Battlefield - Lucifer, greatly amplifying his firepower. With The Best Swordsman's Origin (元) skill as its basis, Tempest was able to develop his True Awakening and allow him to erase an enemy's existence with each bullet and negate their regeneration.[5]

Ranged Weapon Proficiency: Tempest is able to wield any ranged weapon he has with great prowess and accuracy. He can shoot or throw even reload multiple rounds of projectiles with quick succession. As a proficient ranged fighter, his marksmen skills are extraordinary where he is even capable of hitting pressure points and other weak spots with ease.

Subspace: Tempest is able to conceal himself in another dimension within the same space, making him invisible. Tempest can place a mirror image with only the barrel of his gun outside of his subspace and allows him to shoot freely from his safe spot.[4]

Gunner: Tempest uses firearms as his main weapon, preferably long ranged firearms. He creates his own physical bullets, but mainly uses mana bullets and imbues them with holy attribute for more power output.

Tempest's personal attribute is the Holy Attribute, which is a class-type that allows him to deal damage with holy mana and become a Holy Shooter which is a hidden class in the game.

Tempest stabs a syringe filled with light blue substance in his chest, erupting in a massive light blue explosion with the help of a flashbang and a noise amplifier. Tempest unleashes his True Awakening as the Angel of the Battlefield, Lucifer.[5]

Tempest assumes a new form as his entire figure alights with a light blue glow. His eyes light up and a cross materializes on his left eye that serves as his scope. He dons a pair of black wings and sports himself a black and white outfit. His signature weapon, the Sniper Rifle, is also alighted with the same glow.[5]

With the Origin (元) skill as its basis, Tempest's firepower is amplified, now allowing him to erase a part of the person's existence with each bullet shot and completely negate regeneration.[5]

High Purity Bullets: Linked with The Best Swordsman's Origin (元) skill, these bullets are able to delete a part of the opponent's existence with each shot until they're deleted and halt their regeneration.[5]

Flight: With his black wings, Tempest is capable of flying at high speeds, levitate and stand in mid-air as if he was standing on solid ground.[5]

Because of his long-ranged weapons, he stays in the back and provides backup from afar, atop vantage points and positions. With his eyesight and abilities, he makes up for his teammates' weak spots.

When in 1v1 battles, for example the battle against their Nightmarized clones, he uses the sub-space, linked with Choco Bibi, to hide from the enemy, attack and gain better positioning. Tempest's play style borrows mana from Choco Bibi in order to perform other plays.

At some point in the past, Tempest became a Gunner and completed the Job advancement to become a Holy Shooter. A few years ago, he was recruited by Armes in front of a dungeon that Zara Guild had just cleared.

After the Zara Guild had been disbanded, he joined the Grass Roots Guild alongside Master Swordsman and Choco Bibi.

He entered the tournament under Team Choco Bibi. When Choco Bibi teleports Team Dark to the Warp Zone, he threatens Hardcore Leveling Warrior to prove that he wasn't the person who attacked Master Swordsman the previous night.

He self destructs in the battle against Rigos.

He self destructs in an attempt to take down Secretary Park. He fails to do so but provides his teammates with a buff.