Season 2 Episode 13
Sun Wukong is a player in Lucid Adventure. He is a member of Elixir Plant[2] and is currently ranked no.40[1] in the Lucid Ball Ranking System.

Sun Wukong is a young man with ginger hair styled into a top knot and two long side bangs framing his face. The markings of Sun Wukong's crown in mythology engraved on his face.

He wears a hat that depicts the crown as well, two yellow bands around his neck, short red jacket with black shirt, light grey pants with a small red belt that hanged from his waist, and black and red shoes. According to Master Swordsman, he is a monkey. 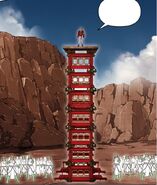 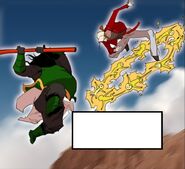 Sun Wukong is a jovial and mischievous person as he had teased Guan Yu for walking into his trap and calling him "Little Daredevil" but he can be serious when things start looking rough. His cool mood can be broken when he is wounded in battle as he was pissed off when Guan Yu slashed him.

Not much has been shown at all. It can be assumed that Sun Wukong is on good terms with his guild and that he dislikes Giga.

During the battle with Ge Des, Sun Wukong became one of Ham's chess pieces. She refers to him as "Elongated Monkey" (길쭉한 원숭이).[3] He was saved by Ham from Ge Des's magic attack and he tried to recruit her to the Elixir Plant Guild but she turned him down.[3]

As the strongest 40th ranked player under the Lucid Ball Ranking System, Sun Wukong is one of the strongest players in the game. Although his exact rank is unknown in Elixir Plant, he has enough authority to command the Magic Corps of his guild in a battle against Giga's forces outside of the Crosswalk of Moon.[2]

In his brief battle with Guan Yu outside of the Crosswalk of Moon, Sun Wukong managed to hold his own against the powerful fighter.[2] He is one of the rankers that responded to Kongming's quest issue during Ge Des's invasion of Charming Castle.[1]

Endurance: Despite being slashed and cut open by Guan Yu's Guandao, Wukong kept his composure and was able to immediately counterattack with a skill of his own.[2]

A personal attribute is based on Sun Wukong (孫悟空), known as the Monkey King, a Chinese trickster god. He plays a central role in the 16th-century novel Journey to the West, achieving enlightenment as Tang Sanzang’s disciple.[4]

Monkey Magic: Wukong is usually surrounded by multiple golden monkeys which he uses to perform various monkey king based spells.[5][6][7]

Weapon Summoning: Wukong is able to summon a gigantic magical staff with the motif of the Legendary Sun Wukong's Ryu Jingu Bang. The staff can vary in size and can be used to both crush targets[5] as well as push them back[7].

Sun Wukong was introduced into the series protecting an important area from Guan Yu and his giga army. He had attempted to stop Guan Yu in his path of destruction by dropping his giant magical staff on him but it didn't stop Guan Yu from destroying Elixir Plant's Guild shield which started an all out fight between the Elixir Plant army and Giga's army.

Sun Wukong confronted Guan Yu and both start to fight with the latter opening up with a successful slash on the former. Sun Wukong was extremely annoyed and retaliated with a magic staff arrow which pierced Guan Yu's ear, pissing him off. Their duel was interrupted by The Best Swordsman who opened up with Lacerate (切), which shocked Sun Wukong.

Sun Wukong is one of the 4 rankers that answered Giga's immediate request for help when Ge Des invaded Charming Castle. Sun Wukong and the other rankers came to the battlefield, hoping to share the reward from the boss monster. He then formed a combo along with other players to halt Ge Des' phoenix.[1] After Ham joined the battle, Sun Wukong became one of her chess pieces.[3]

손오공 is translated as Monkey King by LINE Webtoon.

Retrieved from "https://hardcorelevelingwarrior.fandom.com/wiki/Sun_Wukong?oldid=42006"
Community content is available under CC-BY-SA unless otherwise noted.