Stone is the Vice Guild Master of Elixir Plant Guild[1] and the current Rank No.1 player[2][1] in the Lucid Ball Ranking System. During the two year time skip, he defeated Dark in a ranker match.[1]

Stone has long black spiky hair and black eyes. He wears a white coloured neck brace, an orange jacket, a black t-shirt with a yellow smiley face on it, a yellow belt, black trousers and white/orange coloured trainers.[1] 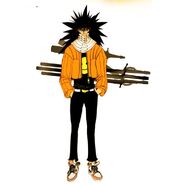 "If any of you got a problem with that, come fight me!!!"

As the current strongest player in Lucid Adventure, Stone is extremely confident in both himself and his abilities. He openly challenged Giga and Yopi Land members that disagreed with his guild master's suggestion to a fight.[1]

Stone finds the repetition of defeating the weak boring and wants to fight someone as strong as himself.[3]

He seems to get a kick out of mocking his opponents as he mocked Dark for his "dorky horns" after defeating him.[2]

After defeating Dark in a ranked match, he mocked Dark's hairdo, calling it "dorky horns". Some say that he is the reason Dark changed his hairstyle.[2]

"Hardcore Leveling Warrior, the No.1 Ranked player before me...who would be stronger, me or him...?!"

Stone's constant beating of weaker people has left him bored. He sees Hardcore Leveling Warrior as a player that had reached the peak and it is implied he wants to fave him in combat.[3]

As the vice guild master of Elixir Plant Guild, Stone has the second highest authority over one of the strongest guilds in Lucid Adventure.

The true extent of Stone's power is currently unknown, but there have been some hints that he is extremely powerful.

As the current Rank no.1 player, Stone is the strongest player in the game. He defeated the powerful player, The King of Dark Land and current rank no.3 player, Dark, who had previously held an undefeated record and is 'hard to beat'. Werewolf implied that he is no "ordinary swordsman".[2]

During the summit between the strongest guilds in Lucid Adventure, Yopi proclaimed that there was no one present at the summit could defeat Stone in a one-on-one fight. Han Sung-Gong would have accepted the proposal to fight for the leadership of the Guild Alliance if Stone was in Giga.

His mere presence alongside his guild master, was enough to stop the war between Giga Empire and Yopi Land, two of the biggest powers in Lucid Adventure.[1]

Stone's power was on full display when he went to the Southwestern Field. He faced about a thousand Nightmares by himself and defeated them easily. He easily defeated Elahistos. The battle was easy that Stone was yawning afterwards.[3]

Immense Swordsmanship: Stone's attack speed is so fast that he can slash multiple targets in a blink of an eye and appear to not have even removed his hands from his pockets and drawn in swords.[3] His attack on Elahistos was so quick that he decapitated the Demon without seeming to remove his hands from his pockets.[3] The accuracy of his strikes were so good that he decapitated every single Nightmare monster including Elahistos head cleanly.[3]

Not much of his combat style can be surmised from the information we have seen, but he most likely uses swords based on his class and the number of swords he carries. During his battle against Nightmares, he appeared to deliver multiple slashes with incredible speed.[3]

During the two year time skip, the Stone defeated Dark in a ranked match, giving him his first loss and only loss. Before leaving, he mocked Dark's hairstyle, calling them "dorky horns".[2]

Alongside his Guild Master, Principal, Stone appeared during the battle between Giga and Yopi Land. Principal urged the factions to stop the fighting and Stone challenged anyone that had a problem with what Principal said to fight him. A truce between the guilds was formed immediately.[1]

Accompanying his Guild Master, Stone and Elixir Plant Guild arrive at the House of Beginnings. They are soon joined by Giga Empire. Han Sung-Gong and Principal exchange pleasantries and soon after, Yopi Land and the Big 4 of the Underworld arrive. Yopi's disposition changes when he sees Han Sung-Gong and he becomes enraged. Principal remarks that she could hear Yopi's heart beat from where she was. Dark Land are the final Guild to arrive at the summit. Akira attacks Yopi whilst Principal and the other guilds watch on.[4] Stone seems surprised by the attack. After the exchanging of greetings, the 4 Big Guild leaders enter Principal's lotus-like barrier and Stone waits.[5]

Retrieved from "https://hardcorelevelingwarrior.fandom.com/wiki/Stone?oldid=28685"
Community content is available under CC-BY-SA unless otherwise noted.