It is a skill that let's Pooh Upooh's summoned zombies recall memories of their past lives. The zombies body is revived and also made stronger than normal zombie because of the recalled soul.[1]

The skill can be used to telepathically communicate with other players.[2]

The skill does not consume any mana.[1]

Pooh Upooh used this skill during the Subjugation Round and allowed the zombie of General Lich to recall his past life.[1]

General Lich used Soul Whisper on the resurrected undead that allowed them to recall their past lives.[1]

Whilst controlling her puppet, Pooh Uppoh used Soul Whisper to communicate with the four other participants, attempting to convince them to work together to defeat Light. The skill was disabled when the doll was killed by Demon.[2]

Hungry Ghost used Sneak Peek to borrow Soul Whisper from Pooh Upooh's Doll and used it to telepathically communicate with the other Giga candidates.[2] 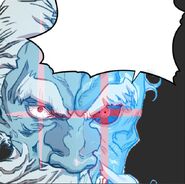 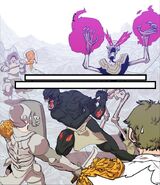 Retrieved from "https://hardcorelevelingwarrior.fandom.com/wiki/Soul_Whisper?oldid=15130"
Community content is available under CC-BY-SA unless otherwise noted.