He was a part of Team Light that took part in the last ever Combat Tournament. They were defeated by Team Dark in the PvP Round Finals.

Secretary Park is a young man with a large muscular build and black hair with a comb over hairstyle. He usually wears the classic male Giga uniform all the time.

During the PVP Round however, he wore a long sleeve stand collar shirt that exposed the middle of his chest, golden plated shoulder armor with blue strap wrapped around his body, blue belt with a golden buckle, linen pants and shoes. Though he usually becomes shirtless during the fight. 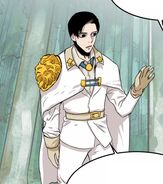 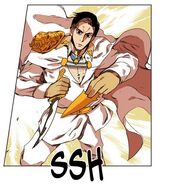 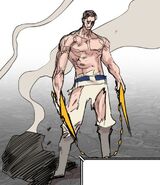 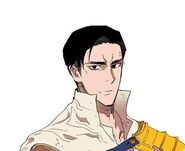 Secretary Park is generally a serious person in and outside of battle, he is a calculating fighter as he was able to analyze where Tempest was going to teleport next and figured out what to do against a rampaging Top Baldhead by reversing his power.

He doesn't like giving new employees a hard time as he told General Manager Park to take it easy on the new employee.

Secretary Park is loyal to Light and regards him highly. He complimented Light's strategy during the Siege Round and was worried about Light when Ultimate Healer summoned the Sword of God and when Hardcore Leveling Warrior flicked him.

As fellow secretaries to Light, they are on good terms and respect each other. He entrusted Secretary Kim with Light whilst he dealt with Hardcore Leveling Warrior who finished him off easily.

Secretary Park is a strong and skilled player as he was chosen by Light to be a part of his team for the Combat Tournament. He was ranked the 49th strongest player by Giga during the First Nightmare War.