Secretary Kim is a player in Lucid Adventure. She is a member of the Giga Empire and the secretary of the Giga Vice President, Light. She was Ranked no.43 in the Giga Scout Ranking System and is a member of Totoras. She was a part of Team Light that took part in the last ever Combat Tournament. They were defeated by Team Dark in the PvP Round Finals. 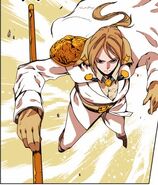 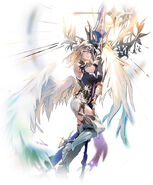 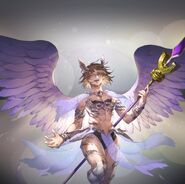 Strength: Secretary Kim was able to shatter the barrier of the Yopi Land's Assassin's stealth magic with a single blow.[2]

High Level Perception: Secretary Kim was able to detect the exact location of the VIP Assassins of Yopi Land despite the group being covered with stealth magic.

Flight: Secretary Kim was seen flying during the Preliminary Round. It is unclear if this her own skill or because of a magic used by Light although it is most likely the latter.

In this form, she easily overwhelmed Firecracker who was using Dark Element Magic; for reference, she was struggling to deal with the Firecracker in her base form.

Enhanced Spearmanship: An unskilled spear thrust from Secretary Kim easily shattered Firecracker's High Barrier and killed Firecracker; in her base form, Secretary Kim's spear attacks could not damage Firecracker. She was able to block an unskilled slash from the Rank No. 1 Hardcore Leveling Warrior; Hardcore Leveling Warrior theorised that she might have had a "Blessing of invulnerability" presumably from God of Blessings.[3] She is able to use powerful attacks such as Spear of Heavenly Summoning.[3]

Holy attribute: In this form, Secretary Kim's spear attacks are imbued with Holy attribute, which can counter Dark element magic.

Flight: In this form, Secretary Kim has wings and is able to fly at high speeds, levitate and stand in mid-air as if he was standing on solid ground. She was fast enough to catch a Light that had been flicked away at high speed by the Rank No.1 Hardcore Leveling Warrior.[3] In Season 2, she is seen with the Valkyrie wings in her base form.[4]

Retrieved from "https://hardcorelevelingwarrior.fandom.com/wiki/Secretary_Kim?oldid=32921"
Community content is available under CC-BY-SA unless otherwise noted.