Sea Dragon Sword takes the form of a classic Japanese Katana. Like every Ego Sword, it has an eye which is located just below the it's Fuchi. It's Tsuba and Tska are both gold coloured and the b lade of the Katan is grey in color.

On it's handle, the cord wrap is Blue in color, the ray skin is black and the pommel is gold.

It is usually sealed in a black scabbard that hangs off the back of Master Swordsman.

Like most Ego swords, Sea Dragon Sword can to be able to communicate with it's owner.

Sea Dragon has not been shown speaking but it appears that it can communicate telepathically. It's handle vibrates when it is communicating with him.[1]

Sea Dragon Sword cares about Master Swordsman and tries to protect him such as when it vibrated to alert him when the fake Hardcore Leveling Warrior knocked on Master Swordsman's door.[2]

Sea Dragon Sword seems to have water property skills that it takes after from Master Swordsman who himself uses water skills.[3]

The blade is strong enough to cut down the Magic Soldiers of Cobalt castle despite them having Mana Shields .[4] 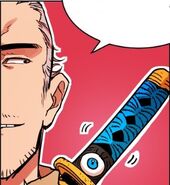 Retrieved from "https://hardcorelevelingwarrior.fandom.com/wiki/Sea_Dragon_Sword?oldid=11143"
Community content is available under CC-BY-SA unless otherwise noted.