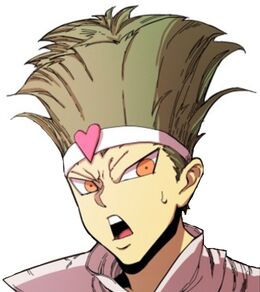 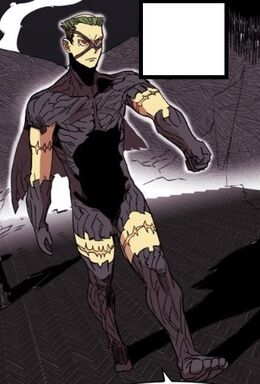 Episode 1
Scallion Head[1] is the leader of the Scallion Head's Guild. Both him and his guild have had several unfortunate run-ins with Hardcore Leveling Warrior which caused them to resent the former Rank 1 Player.

A level 1 Hardcore Leveling Warrior ended up provoking him into a Legal PK, where he was defeated and lost some of his stats as a result.[1][4] His guild was later taken over by Sad Smile and he joined Nightmare. He was given the Golden Gauntlets and Golden Boots and tasked with retrieving No Name.

Scallion Head is a pale green man with a lean built body, orange eyes and a green shaggy beehive hairstyle. He often has an angry expression on his face.

At first, Scallion Head wore a white head band with a pink heart shape in the middle and a large white cloth worn around his neck that acted as his cape with a big stand up collar. He wore a very sleeveless white robe with a red cross in the front, exposing his entire sides, which was then wrapped with a thin brown belt around his waist. He wore short baggy white pants, white gloves and shoes.

After siding with Nightmare, almost his entire appearance changed, replacing the entire attire he wore with Nightmare Bandages that wrapped around his entire body and had a large cape made out of it as well. He had a more shaggy beehive hairstyle and his face was partially covered with Nightmare bandages. He also wore the Golden Plate Gauntlets of Fire Dragon and the Golden Plate Boots of Fire Dragon before they were forcibly taken from him by Hardcore Leveling Warrior.

After his last fight with Hardcore Leveling Warrior, he no longer wore the golden armor parts and had stitches across his limbs as they were put back together after it was sliced off by Lacerate (切). Almost his entire hair was sliced off as well, giving him a bald patch as well. 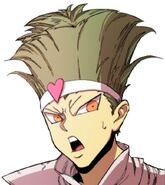 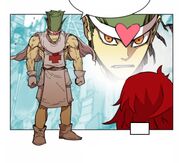 Scallion Head is a person that very much values his guild above all else. So much so that he swore vengeance against the Ranked No.1 Hardcore Leveling Warrior, who had constantly raided his guild multiple times, despite his power and reputation. He's a very determined individual, spending all of his resources just so he could take his revenge on Hardcore Leveling Warrior, even allying himself with Nightmare just so he could have the power to do so.[5]

He is also quite the ambitious person as he thought he could not only defeat the one, but even her if he had all three pieces of the Golden Armour Set.[6] He also has a sense of justice as he tried to take revenge on Hardcore Leveling Warrior as well for forcing many players to quit Lucid Adventure because of the latter's playstyle by beating him senselessly for a while. Scallion Head is also easy to taunt and is quite gullible as Hardcore Leveling Warrior lured him many times into a duel, first taunting him into a duel for his stats[1] and lastly for the Golder Armour Pieces and defeated him both times.[6]

Scallion Head loves and cares for his guild very much, declaring revenge on the powerful Rank No.1 Hardcore Leveling Warrior despite being defeated so many times. He is always looking for ways to make his guild rise in power, colluding even with the One, Nightmare, and Zero. He sought to also take their castle back after Zero took it from them by using all three pieces of the Golden Armour Set.[6]

He values his guild so much that he would prioritizes them above his great hatred of Hardcore Leveling Warrior as when the latter threatened to kill his guildmates and spread their bodies across Lucid Adventure, Scallion Head became very worried and agreed to return his armour which he was very stubborn to let go of before. Scallion Head apologized to his guildmates after his fight as well.[6]

"The One" that Scallion Head refers to and considers more powerful than him. For unknown reasons, Scallion Head and his guild became subordinates to him and was supplied with Nightmare powers and equipment (though the One gives them this under the orders of Zero).

Sad Smile took over Scallion Head's Guild Castle and Scallion Head had planned on taking it back with three armour parts of the Golden Armour Set.

It is unknown how Scallion Head knows Zero but he knows her and considers her more powerful than him, than even Sad Smile as well. Zero was the one that gave them Nightmare Powers and ordered Sad Smile to supply Scallion Head and his guild with equipment such as the Gauntlets and Plate Boots of the Golden Armour Set.[6]

As the Guild Master of his Guild, Scallion Head has complete authority over his guild. He was a particularly strong player as when the Lvl 1 Hardcore Leveling Warrior was punched by him, the latter was quite surprised and questioned if he was this strong all this time.[1]

He possesses notable healing capabilities, able to quickly heal a person multiple times to full health and prevent them from dying as they are repeatedly beaten senselessly by a mob.[3]

Strength: A blow from Scallion Head was enough to halve a Lvl 1 Hardcore Leveling Warrior's health which also made the latter question if he was this strong after all.[1]

Enhanced Speed: Scallion Head's speed was greatly enhanced to the point that he looked like he was vanishing whenever he dodged his opponents attacks. He was so fast that he could dodge Hardcore Leveling Warrior's attacks, even Moonlight Slash, twice, dodging even both Hardcore Leveling Warrior and Le. Rajie's attack as well.[5] Scallion Head was fast enough to dodge No Name's surprise attack.[8]

Swordsmanship: Scallion Head managed to learn swordsmanship and was proficient to the point he could consecutively use the Sword Dance of Nightmare which was capable of deleting players from Lucid Adventure.[6]

Scallion Head is a direct and straightforward combatant, preferring to beat his opponents senselessly whilst sometimes healing them at the same time in order to prolong his attacks and prevent them from dying.

After allying with Nightmare, he still uses his fists however he now uses a Nightmare Sword to paralyze and delete his opponents when he takes them seriously.