“My name is Ruud Ra Kan! I am the second son of the Demon King Sik, the true master of this world!”
― Ruud Ra Kan

Ruud Ra Kan was a demon in Lucid Adventure. He was the second demon prince and son of the Demon King, Sik. Along with most of the other demons, Ruud Ra Kan was sealed in the Demon World by the Ancient Knights after the demons lost the Human-Demon War.

Ruud Ra Kan was released back into the world along with other demons after the seal on the Demon World was broken by Nightmare. He served as one of the Generals for Nightmare and was told to stay in Jelly Village by No Name.

Due to his actions and role, he is one of the main antagonists in the Beyond the Boundary Arc.

Ruud Ra Kan is a magenta-skinned demon with white short hair and two massive black horns that protruded downwards. He wear full black plated armor and a black waistcloth. The collar of his armor was wide and makes his neck visible.

When he was a child, he wore a black long sleeved shirt with a red napkin tied on his collar, red cloth around his waist, black pants and boots. 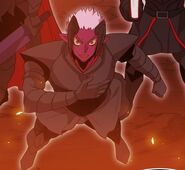 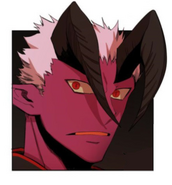 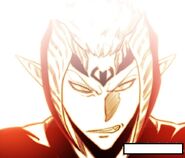 As a Demon Prince and a direct descendant of Sik, Ruud is extremely confident in his abilities. He considers himself the greatest warrior of the Demon World and always wants to be in the heat of battle. He felts slighted that he wasn't allowed to take direct action in the Great War by No Name. Immediately there was a chance to face a strong opponent, he excitedly rushed to their location.

Just like Ligos and other demons, Ruud Ra Kan looks down on humans. He feels it is an honour for the humans that face him in combat. During the Human-Demon War, he used to go on human hunts.

Ruud respects the strong, regardless of what race they are. Despite the fact that most demons look down on humans, Ruud has shown respect for the Ancient Knights because of their power.

He despises the weak and feels it is beneath himself to fight them. He was annoyed that Drip Soup and Cocomori dared to draw their swords at him despite what he considered weak swordsmanship from the both of them.

As a Demon Prince, he feels disgusted when compared to other demons that are not of his rank as he showed when he was compared to Ligos.

Ruud is extremely proud to be the Demon Prince and the son of Sik and believes that he is the true ruler of the Demon World.

Ruud appears to have a competitive rivalry with his two brothers. He was upset that they were fighting directly in the front lines whilst he was sitting doing nothing in Jelly Village because of No Name's orders.[1]

Ruud begrudgingly accepted No Name's orders due to her freeing him and the rest of the demons. He felt aggrieved and disgraced that she had him sitting in Jelly Village while his brothers were fighting on the front lines which led him to refer to her as a "half-Bitch".[1]

When one of his underlings reported that humans were attacking them, Ruud was extremely excited to face off against humans once again after a 1000s of years. Apart from the Best Swordsman, Ruud was disappointing in the strength of the Grass Roots Guild members, especially when compared to the Ancient Knights.[1] He even felt offended that Drip Soup and Cocomori even dared to attack him with what he considered weak swordsmanship. When the rest of the Grass Roots members fled, he was intrigued by Choco Bibi's spatial magic.

“He has greater power than Ligos...”
― Choco Bibi

As the direct descendant of the Demon King, Sic, Ruud Ra Kan is extremely powerful. His power was far above that of a Named Monster. Bunny Turtle said that when he met Ruud, in the hundreds of years he had lived, he had never felt that kind of fear in his whole life. Such is his power that his rating appears as "???" and cannot be measured using the normal monster rating scale.

Choco Bibi theorised that he has greater power than Ligos, the 5* rated Demon that single-handedly defeated the Hardcore Leveling Warrior-Yopi Land-Grass Roots Alliance during the Subjugation Round. In fact, Ruud Ra Kan referred to Ligos as a lowly being.

Attack Speed: He was able to deliver two powerful blows to Drip Soup and Cocomori almost instantly before they could hit him with their swords, which sent the two swordsmen flying.

Durability: Ruud's Durability is extremely high. He easily tanked a consecutive sword attack from Drip Soup and Cocomori as well as a holy mana shot from Tempest without suffering any damage. He caught a sword strike from The Best Swordsman who was using 50% of his True Personal Attribute and buffed his movement speed with Hero's Footsteps with his bare hands and did not suffer any damage. Tempest could not damage Ruud's body even when using his mana imbued with holy attribute that is supposed to be a demon's weakness, although Ruud did say that the shots stung.

Demonic Regeneration: Due to his Demon's Blood passive, Ruud has extraordinary regenerative capabilities. He instantly recovered from the fatal wounds caused by his own Dark Ball in just a few seconds; he was mostly broken bones and torn flesh before his regeneration.

Royal Aura: Ruud's crimson aura causes weaker creatures to feel absolute fear. The Goblins all cowered in fear when reporting to Ruud and even broke into sweats.

Immense Magic Power: As a high ranking Demon, Ruud possesses extraordinary magic power. His mana was so strong that The Best Swordsman could feel him approaching and tried warning his guild members of the danger approaching.. His magic attacks are so strong that they are even capable of completely overwhelming his own body's immense durability and resilience.

Royal Blood of the Demon King

“I'll fight you with all sincerity, Human!!”
― Ruud Ra Kan

Ruud Ra Kan uses this skill when he takes his opponent seriously. He opens the bloodline of the Demon King and the Demon King's insignia is appears on his forehead in a manner that is similar to his ancestor Hoi and his father Sik.

In this form, all of Ruud Ra Kan's abilities are given a tremendous boost and he releases a tremendous amount of mana that can be felt from far away and causes demons to go berserk. Choco Bibi could not believe that The Best Swordsman was fighting such a being.[3]

Only when The Best Swordsman unlocked his hidden skill that buffed all his offensive stats by five times was Ruud Ra Kan bested.[5]

Enhanced Magic Power: In this form, Ruud Ra Kan's magic power is further amplified and he is able to use powerful destructive magic such as the Sphere of Destruction that can cause large scale damage.[5]

Berserk Inducement: The sheer amount of mana released by Ruud Ra Kan in this form caused all his subordinate monsters to go berserk, which presumably their attack power.[3]

“The Power of Demios, the Demonic Dragon is overflowing inside me!!”

After being critically injured by The Best Swordsman, Ruud Ra Kan's desperate call for more power caused the Nightmare Core that he had consumed at an earlier point to awaken and grant him the power of Nightmare. Ruud Ra Kan is forcibly fused with Demios and undergoes Nightmarization.[2]

Ruud Ra Kan strength, speed, regeneration and defence are significantly increased and his skills are imbued with the power of Nightmare and he gives off an extreme concentration of Nightmare Mana that made even The Best Swordsman wary.[2]

In this form, Ruud Ra Kan is capable of easily overpowering The Best Swordsman who had his offensive stats increased by Those Who Seek Death Shall Live, Those Who Seek Life Shall Die and was using a personal attribute hero weapon. Just blocking and dodging Ruud Ra Kan's punches overwhelmed The Best Swordsman and left him no room to counter attack.[2]

Despite the great power granted by the buff, Nightmare takes away Ruud's ego. Ruud's emotion and reason became suppressed and absorbed into the power.[2] As the Nightmare Core's voice grew louder and louder, Ruud Ra Kan became more powerful and became closer in power to the real Demonic Dragon, Demios.

Enhanced Physical Abilities: All of Ruud Ra Kan's physical stats are enhanced to an extreme level.

Dragon Magic: Due to fusing with Demios, Ruud Ra Kan is able to use powerful Dragon Magic with extreme destructive capabilities.[2]

.
1/3
After being sliced apart by The Best Swordsman's Double Lacerte, the dying Ruud Ra Kan gave in to the voice in his head fully and transformed into the Demonic Dragon, Demios.[7]

Demonic Dragon Mana: As an ancient dragon, Ruud Ra Kan's mana cannot be compared to Demios. Just by emitting its mana, Demios was able to break The Best Swordsman's conceptual magic by 50%.[7]

Overwhelming Magic Power: As a true dragon, Demios is able to use real dragon magic and use spells that are capable of destroying The Best Swordsman's conceptual barrier and territory.[7]

Sword Force - Demios: Ruud Ra Kan uses Sword Force in both his hands and delivers a powerful blow to the target. He is able to use this skill because he combined with Demios after Nightmarization.

Over 1000s of years ago, Ruud took part in the Human-Demon War and faced the Ancient Knights. He was sealed along with all of the blood descendants of Sic and demons in the Demon World by the Knights after the demons lost the war. He was released back into the human world by Nightmare, who broke the seal on the Demon World.

Ruud Ra Kan is sitting in the Jelly Village Castle when a Goblin reports that No Name told him to stay put in Jelly Village. Ruud Ra Kan curses No Name in Demonic Language and is eager to get on the front lines like his brothers. Another Goblin runs into the castle to report that Gobungi had been murdered with what looked like human users. Ruud Ra Kan laughs maniacally and asks for the location before flying off to The West Entrance.[1]

He kicks The Best Swordsman into a rocky hill. He stands there and takes two sword strikes from Drip Soup and Cocomori and is disappointed at how weak the Grass Roots Guild is. He hears Grass Roots Guild comparing his power to Ligo's and tells them not to compare him to such a vulgar life form.[1]

Ruud Ra Kan blocks an attack from The Best Swordsman with his hands and slams the swordsman tinto the ground.He is shot by Tempest's holy attribute bullets and uses his Royal Demon's Eyes to see that Tempest was shooting him from another dimension. He blocked punched Drip Soup and Cocomori while they were midway through their sword attacks and mocked their swordsmanship. He then dodged Choco Bibi's Space Deletion at point blank range before charging at the Space-Time Wizard.[8]

Ruud then uses Dark Rain which forces Choco Bibi to teleport the rest of the Grass Roots Guild back to Jelly Village and The Best Swordsman to use his 100% True Awakening.[8]

After Ruud Ra Kan's died, he had become a giant reward box which the Best Swordsman noted to be quite sad. There were numerous items from the chest such as the dark attribute gauntlet that Drip Soup couldn't wield and Ruud Ra Kan's Soul Fragment's.

However, a crow suddenly appeared and successfully stole a piece of the souls from the Best Swordsman's hands then going through a portal, teleporting it somewhere else.

Ruud Ra Kan's name was incorrectly translated as Ruud La Kan by Line Webtoon. It was retrospectively corrected in all past episodes and future episodes.