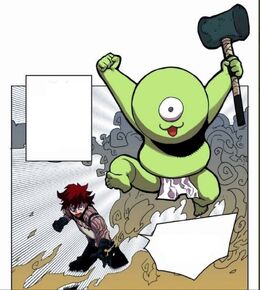 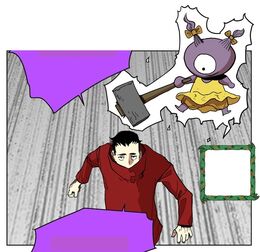 The Ruler (The Moderator) is a one eyed humanoid creature that can be summoned by Gamblers.

Hardcore Leveling Warrior's Ruler is a bald male humanoid creature that has a large eye with a white sclera and a tiny black pupil. It wears a white Mawashi. It is light green in color.[1]

Hungry Ghost's Ruler is female and looks similar to HCLW's except it is purple colored and has two small twin-tails on its head.[2]

The Ruler can fly and watches the rules to be obeyed to ensure they are adhered to by both all participants involved.[1]

If a player attempts to break the rules, the Ruler breaks the cheaters wrists with The Hammer of Fairness[1] which inflicts the same pain in The Real World as well.[2]

According to Scallion Head, the way The Ruler follows the player is annoying.[4]

Hardcore Leveling Warrior vs The Spirit of Mirror

HCLW summoned The Ruler during his dice game with The Spirit of Mirror to ensure that the rules of the 'Bet' were followed. After HCLW won, The Spirit of Mirror attempted to use his Mind Mirror ability to change HCLW's memory to think that he lost. The skill was nullified by The Ruler and he had his wrists broken.[1]

HCLW summoned The Ruler during his 'Bet' with Scallion Head. after Scallion Head forfeited, The Ruler followed him to ensure he carried out his promise of leading HCLW to 'The One'. Once The Ruler confirmed that Scallion Head had fulfilled the conditions of the 'Bet', it disappeared.[5]

In order to get the other players to trust him, Hungry Ghost summoned the Ruler and swore on his wrists that he would never betray them. When the players were still hesitant to co-operate, he swore on his head. The Ruler would use the hammer on his head if he betrays the team which would mean the pain will also be inflicted in The Real World, possibly killing him.[2] 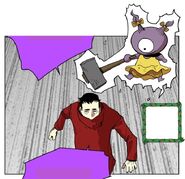 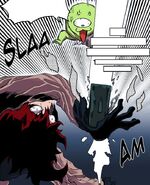 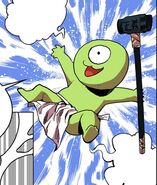 Retrieved from "https://hardcorelevelingwarrior.fandom.com/wiki/Ruler_(The_Moderator)?oldid=22351"
Community content is available under CC-BY-SA unless otherwise noted.