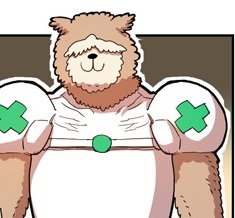 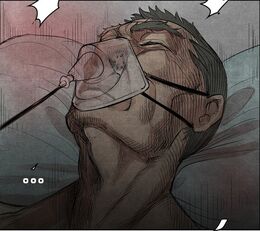 "You guys all have 'Lucid Adventure' accounts right? Login tonight! I will write my will in there"

Han Gun-jae (Line Webtoon: Roy Han), also known as Sword Master, Alpaca Man and Novelist Han in Lucid Adventure, was the former Chairman of Giga Group, The Creator and former Absolute God of Lucid Adventure.[1] He was the father of Sam Han, June Han and James Han as well as the paternal grandfather of Nathan Han, Sua Han, Lucas Han and Carter Han. He is a former member of Keynes Party and Bamboo Spear Man's Party. He is also Sora's former Master as well as the person that gave Hardcore Leveling Warrior the Divine Skill, Lacerate (節).

To help him enjoy the world of Lucid Adventure, Roy Han split his soul between 3 characters, Swords Master, Alpaca Man and Novelist Han. He competed in the last ever Combat Tournament as Alpaca Man and was part of Team Bamboo Spear Man's Party who were knocked out by Team Light in the Siege Round.

In the real world, Roy Han contracted an unknown illness. He gathered his family in the hospital telling them to log into Lucid Adventure as he will be leaving his will online. Soon after that, he fell into a coma, but his consciousness remained online in Lucid Adventure.[2]

In the game, he was constantly being chased by the Giga Empire who were trying to capture him in order to control Lucid Adventure completely. He finally came face to face with Sam Han for the first time in Lucid Adventure and his 3 avatars united to remove him from the game. Unfortunately, he was defeated by his eldest son. After engaging Sam Han in Lucid Adventure, the rest of his power was used up and he he was forced to log-out and his life is was hanging on by a thread.[3][4] He remained in The Subconscious World and aided Hardcore Leveling Warrior in returning Lucid Adventure after he was killed by the Contractor.

After the conclusion of the PvP Round, he used the last bit of his power to see Carter Han in Lucid Adventure, encouraging him one final time before finally passing away.[5]

Roy Han was an elderly man with gray hair. He often had stern business-like expression on his face. Roy Han almost always wore a suit and tie together with a long-sleeved buttoned shirt.

Retrieved from "https://hardcorelevelingwarrior.fandom.com/wiki/Roy_Han?oldid=22186"
Community content is available under CC-BY-SA unless otherwise noted.