Pooh Upooh resurrects and controls the bodies of the dead in the surrounding area.[1]

Pooh Upooh used this skill in the Subjugation Round against Giga. She was able to summon a large number of Zombies thanks because the bones and fleshes of the defeated warriors who fought and died in the previous Combat Tournaments were buried in the Subjugation Field.[1] 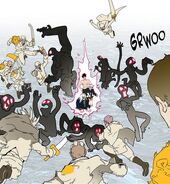 Retrieved from "https://hardcorelevelingwarrior.fandom.com/wiki/Rising_Undead?oldid=12130"
Community content is available under CC-BY-SA unless otherwise noted.