Rim is an NPC who is Heart Heater's Assistant[1] and seems to be in charge of the chores for Heart Heater and by extension, Dark.

Rim is a tanned young man with neck length white hair. As a homunculus, his body is full of stitches, his white and green arms that are capable of enlarging and extending themselves belong to an unknown specimen. 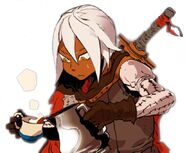 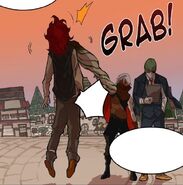 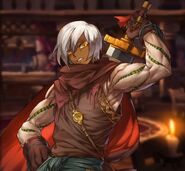 Rim is a loyal and reliable person. He has served Heart Heater and Dark for the longest time even now, never questioning their orders. He is happy in slicing off other people's fingers when they refused to pay their debts. He is easily flustered when being complimented on his work. However, he can hold a grudge as observed when he grabbed Hardcore Leveling Warrior with such anger for hitting him when he was Rank 1.

Like Heart Heater, he is the servant to Dark and quickly comes to his aid when called upon. While his main allegiance is to Heart Heater, he still helps Dark whenever he calls for him. Even tries to impress Dark with his skill in bakery and food, becoming upset if its called 'lame'. Otherwise, he is a loyal follower and does what he can to help the team.

Two years later, Rim is more loyal than ever to Dark and is involved with Dark Land's adminstration alongside Heart Heater. He shows concern about Dark's persistent lateness to meetings involving Dark Land and wishes Dark would take his duty as King more seriously.[2]

The assistant to Heart Heater and loyal companion. Always doing exactly what Heart Heater says similar to Dark. Having full faith in him and always wants to please him. Cheering for him during the PvP rounds and gets upset if someone calls his boss names. A true follower that will defend his master no matter what.

As a member of Team Dark, Rim serves Sora. They were good friends as Rim would always feed Sora with cakes and cookies that Sora said were the best. He was worried as well when Sora didn't eat the cake she had. Two years later, they remain as good friends.

Rim's grudge quickly subsided however, when Hardcore agreed to help Dark get stronger.

At first, he had tried to attack Ledinaia for messing with Heart Heater's hair. After he learned that she was Heart Heater's "older sister", he quickly apologized and became nice to her.

As Heart Heater's henchmen, Rim is a proficient fighter and is well versed in all manners of business and administration. He is very capable of handling himself and his swordsmanship is quite well known throughout Lucid Adventure.

Rim is a strong swordsman as he is able to casually wield a massive greatsword with ease and move around with great dexterity as shown when he easily killed a lvl 90. Swordsman Bodyguard in one moment.

Scientific Knowledge: Rim is well versed in scientific knowledge and in all manner of things as he personally helps Heart Heater with his experimentations.

Administrative Skills: Rim is stated to be capable of handling an entire kingdom on his own according to Heart Heater who left him in charge as he left Dark Land.

Rim prefers to move around the fight with his greatsword and wield it with one hand.

He then grabbed Hardcore Leveling Warrior after he reverted back to Level 1 before he was kicked by Sora. He proceeded to engage Sora in a duel and was being pushed back before he was sliced in two by General Guan Yu. He was then carried to Dragon Mountain along with Hardcore Leveling Warrior, Heart Heater and Rim in the mouth of Heart Heater's Dragon.

Rim is sweeping Quest House while Dark and Heart Heater are discussing the rumour about Hardcore Leveling Warrior's death. Rim is frozen along with Heart Heater when Dark's personal attribute, Time, stops time to speak with Dark.[3]

Rim was in Quest House reporting the Nightmare incidents that were occurring to Heart Heater. He was concerned about Dark's lateness. He gives Dark papers to sign and chastises him for not taking his affairs as King more seriously. He tried getting Dark to stay as they had more business to attend to, but Dark ran off as he was late for his group assignments.[2]