Restraining Orb is an Immobilization Equipment that is used by Giga Guild's Security Team. It is an Ancient Relic. Restraining Orb - Multiple Shots is a more powerful version of this skill.[1]

It is a Golden ball that is surrounded by multiple eyes. When the eyes are opened the immobilization Magic can be fired from the orb.

The Ancient Reilic is used by The Security Team to apprehend 'Bug Players'. The restraining Orb fires Golden beams towards the target that binds them and forcibly extracts the Nightmare bug from their bodies.

The magic can be avoided by a player with great speed such as Armes, who avoided the shots at point blank range or by deflecting them with a powerful skill such as Armes Santa Maria.

The orb was used by on Radish Kimchi after he used Nightmare. He was then arrested by Giga and presumably deleted from Lucid Adventure.

It was used by The Security Team to capture the Bug infected players of the Zara Guild as well as to capture Armes. 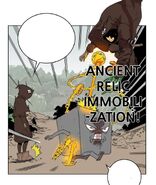 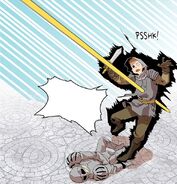 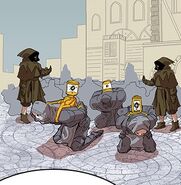 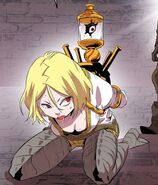