Recreation of the Legend - Field: Uldolmok

Recreation of the Legend - Field: Uldolmok

Recreation of the Legend - Field: Uldolmok is the conceptual magic of The Best Swordsman's personal attribute, Yi Sun-Shin.[1]

'On Board' Effect (승선효과): The sea currents absorb the enemy's mana. The absorbed mana is distributed to the party members who are 'on board'.[3]

Condition: Can only be used in The Best Swordsman's own territory.[1][3][2]

The Best Swordsman uses conceptual magic to create Uldolmok. Once activated, Grass Roots Guild territory is recognised as Uldolmok and the 'On Board' effect is activated.[3]

When the party members have been released from the field, the 'On Board' effect is deactivated.[3]

The skill also has a binding and restraining effect on the target which prevents them from moving.[3]

The Best Swordsman can narrow the size of the barrier and use it to seal magic attacks and enemies.[3][4] 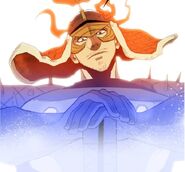 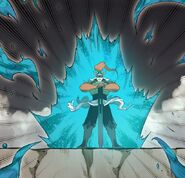 ...The sea water of Uldolmok being generated... 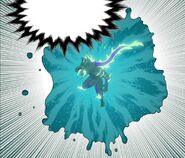 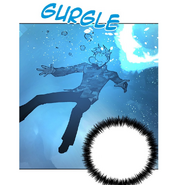 ...then narrowing it to trap Hardcore Leveling Warrior...

...which then traps both himself and Hardcore Leveling Warrior

In Episode 154, it was revealed that The Best Swordsman had a conceptual magic and concept destruction by Tempest. This happened 2+ years ago (14+ years ago in Lucid Adventure). This skill was unlocked a year into the time skip (7 years ago Lucid Adventure Time).

Either this is a completely different skill to the one referred to in Episode 154 or there is a possible setting error with the time difference.

The 'Uldolmok Strait' has proved important at several points in Korean history. The seclusion it provided allowed the Sambyeolcho Rebellion to take refuge here in 1271. In 1597, during the Imjin War, the Korean admiral, Yi Sun-sin, achieved a decisive victory in the Battle of Myeongnyang although he was massively outnumbered by the Japanese fleet. Tidal forces make current of the Myeongnyang Strait reverse direction roughly every three hours. During the lifetime of Yi Sun-Shin, it was called 'Uldolmok,' or 'the Roaring Channel,' most likely because of the powerful tidal forces occupying and traversing the channel, which were especially loud during Springtime.