For other uses of this name, see Rajie Style Kill Fist (Disambiguation).

Le. Rajie first used this skill to defeat a bear and that is how it got it's name.[1] It looked like a two fisted punch.

It seems like the higher the level, the bigger the Aura on the arm of the user.[2]

Dark is able to use this skill when in Devil x Dark Magician Mode.[3]

When Dark used this skill the rocks around the him where destroyed[3] and his hands moves so fast that it looked that he had multiple arms.[1]

It can be used as a combination skill as Dark used Bear Hunt Two-Hit Combo (곰죽이기 2연격, gomjug-igi 2yeongyeog) to defeat Axe Beard.[1]

The Combat Skill was powerful enough to defeat Axe Beard.[1] 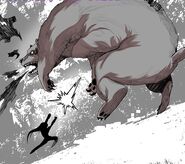 Lazie using the Bear Hunt for the first time (Episode 61)

Rajie first created the skill when he killed bear.[1]

Rajie used Bear Hunt to destroy some of the Golems. When he used it there were giant blue energy beams around his arm.[2]