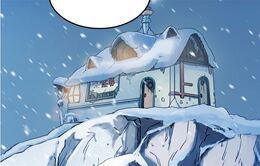 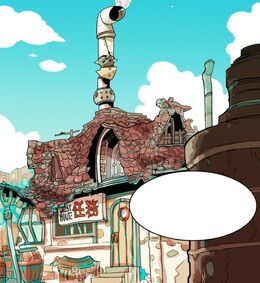 Episode 1
Quest House[1] is a pawn shop that is owned by Heart Heater. At the start of the series, it was located in Yopi Land. It is currently located at the centre of Dark Land and serves as the de-facto base of operations of the Kingdom.

This is where Heart Heater conducts his business and where he can be usually found acting as an intermediary for quests and also this is where he is paid the money owed to him.

Inside of Quest House, there are wanted posters on the wall as well as the fingers of debtors who did not pay back their debt on time.

Dark's Party can usually be found here when not doing quests.

Quest House was originally Heart Heater's pawn shop. Quest House was the first building of Dark Land, serving as it's centre when Dark Land was expanding.[2] and serves as it's de facto 'Dark Land Castle'. Quest House is the centre of Dark Land. Two years later, Quest House is now on the top of a mountain that is located at the heart of Dark Land. All the administrative work with regards to the country takes place within it. To gain access to the it, a person has to approach it aerially as there are no stairs on the high mountain it is situated on.[3]

Due to the minimal space inside Quest House, the paper work for Dark Land has to be put laid on the floor even with Heart Heater and Rim trying their best to minimise the paper work. This greatly annoys Dark.[3]

Hardcore Leveling Warrior visits Quest House to get a quest from Heart Heater. 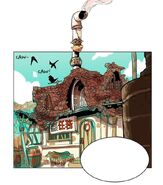 Quest House carried away from Yopi Land by 3 dragons

Quest House in the Unnamed Place in the Northern Province