“I'm here as a guide, that's my role. A guide who leads this game to the right ending”
― Principal[source]

Principal is the Guild Master of the Elixir Plant Guild.[1] Because of her upright nature, she was chosen by the Dragon of Light to lead the game to the right.[2]

She proposed that the major 4 Guild have a truce and have a Summit at The House of Beginnings.[1] During the guild summit, she used her 'Armistice Agreement Skill' that prevents the major 4 guilds from attacking each other while they all subjugate Nightmare.[2]

Principal is fair-skinned with long light brown hair and elongated earlobes. She has white sclerae with large white irises and no pupils, although she usually keeps her eyes closed. Inscribed on her upper body are ancient writings of an unknown origin.

She has a pink lotus on her head, a large transparent green circlet above her head and she wears a cream coloured Buddhist robe.

She has a pink aura that emanates from her body most of the time which gives her hair and robes a pink coloured tint.

She always appears in a lotus pose on top of a lotus throne. 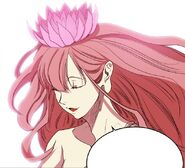 Like her guild before going under the wing of the Dragon of Light, Principal is a pacifist and holds no malice. Unlike the majority of players who only want to conquer Lucid Adventure for power, she acts as a guide to lead the game to the right ending. This is the reason the dragon chose her.[2] Her upfront personality even caused the normally apprehensive Yopy to trust her motive.[2]

She also looks at the bigger picture at hand rather than what's right in front of her. She urged the "pointless" fighting between Giga and Yopi Land to stop in order for all the forces to focus on the growing power of nightmare.[1]

She is only concerned about leading the game to the right ending and does not crave power. Despite having Stone in her corner and being the obvious favourite in a battle for the Guild Alliance position, she turned down the chance as she did not want to cause any more problems and she wanted stopping Nightmare to be the priority.[3]

She is very intuitive as she could see through Yopy's plan to make Dark the Guild Alliance Leader during the summit.[3]

Despite Principal's almost sage-like disposition, she is aware it is in human nature for people to make promises and do something else behind your back.[4]

Principal never took part in battles and her first appearance on the battlefield was to call for a truce between the major 4 guilds.[1]

Principal is the Guild Master of the Elixir Plant Guild. The everyday relationship between him and his guild members is unknown but they are al presumably bonded by their relationship to the Dragon of Light, who gives the guild powers.

Principal trusts Stone's power completely and he is by her side when she steps outside of her territory.[1][4] During the start of The Great War, she guided Stone to Nightmare's location and told him about the number of Nightmares in the vicinity. Despite there being about a 1000 Nightmares, she trusted him to deal with them because of his power.[5]

The Dragon of Light is the benefactor of the Elixir Plant Guild. After the death of the Gods, she chose the guild and started giving them powers. Principal was chosen by the Dragon of Light because of her morally upright disposition and her wanting to lead the game to the right ending.[2]

Despite Giga being one of Elixir Plant Guild's enemies, Principal did not hesitate to form an alliance with them in order to subjugate the growing threat of Nightmare.[1] She was cordial to Han Sung-Gong when they met.[4] She believes that Giga will try and reap the benefits of the war with Nightmare, and will eventual try to topple the other 4 big guilds after they supress Nightmare easily.[3]

Principal appears to have a cordial relationship with Yopy. Yopy appeared to trust her motives and knew she would turn down the Guild Alliance leadership position.[2] She thought Yopy wanted to be the alliance leader when he suggested that the big 4 guilds battle it out for the guild alliance position, but when he suggested it be between Giga and Dark Land, she figured out that Yopy was looking ahead into the future of what will follow after the Guild Alliance suppresses Nightmare; she believes Giga will take advantage and trample on all of them and Yopy plans on bringing up Dark Land to defeat Giga in the end. She appeared impressed by Yopy's scheme.[3] She was shocked that Yopy managed to break her 'Armistice Agreement Skill'.[6]

Principal is wary of the threat of Nightmare as they captured all territories within the space of a few months.[2] He apprehension about Nightmare forced her to appear on the battlefield for the first time and stop the battle between Giga and Yopy Land. She suggested a truce and suggested a summit meeting between the Guilds in order to form an alliance that could stop Nightmare.[1] She has some unrevealed information on Nightmare and doesn't want Nightmare to clear the game under any circumstances.[2]

Principal believes No Name is very mysterious. By chance, Principal saw No Name. She said No Name doesn't know herself, which makes her even more dangerous.[2]

As the guild master of Elixir Plant Guild, Principal has authority over one of the strongest guilds in Lucid Adventure.

It is currently unknown how strong Principal really is, but there have been some hints that she is extremely powerful.

Accompanied by Stone, Principal's mere presence and words were enough to stop the war between Giga and Yopy Land.[1]

Dimensional Barrier Creation: Principal can create a giant pink lotus-shaped barrier that can enclose her and her targets.[2] The inside of the barrier is Principal's own unique area. Words spoken and promises made within it cannot be heard outside the barrier.[2] According to Heart heater, It is an amazing skill that can re-establish or even recreate the rules that exist in Lucid Adventure.[2]

Oath Manipulation: Principal has an 'Armistice Agreement Skill' (휴전 협약' 스킬), a 'Skill of Promise' with a strong binding force that cannot be broken easily.[4] Principal is able to create a Bracelet through which the pre-agreed rules can be enforced.[2] The bracelet does not harm the wearer.[2] The contracts can be monitored by Principal in the form of giant pink orbs that she placed around herself in Eugria, with each pink orb corresponding to a corresponding bracelet.[6] The contract of the skill can be broken by a skill of a higher tier such as Yopy's Breach of Contract,[7][6] which was based on Sad Smile's Transcendental skill Type personal attribute, The Contractor.[8] When a contract has been broken, the corresponding pink orb that symbolises the contract shatters.[6]

Teleportation: Principal teleported to the location where the battle between Giga and Yopy Land was taking place.[1]

Principal has currently not been seen in combat.

Accompanied by Stone, Principal appeared at the border where Giga and Yopy Land where fighting. She urged both guilds to stop the "pointless" fighting as they had a common enemy in the form of New Nightmare. Stone chimed in and said anyone who had a problem with what Principal said should come and fight him. Immediately after her appearance, a temporary truce was made between Giga and Yopy Land.[1]

Principal and Elixir Plant Guild arrive at the House of Beginnings. They are soon joined by Giga Empire. Han Sung-Gong and Principal exchange pleasantries and soon after, Yopy Land and the Big 4 of the Underworld arrive. Yopy's disposition changes when he sees Han Sung-Gong and he becomes enraged. Principal remarks that she could hear Yopy's heart beat from where she was. Dark Land are the final Guild to arrive at the summit. Akira attacks Yopy whilst Principal and the other guilds watch on.[4][2]

After the exchanging of greetings, Principal and the 3 guild leaders enter in Principal's lotus-like barrier. Principal tells the 3 leaders of her plan for a truce in order to deal with No Name and the threat of New Nightmare. Principal creates 'Bracelets of Rules', which she puts on and gives to the other guild leaders. With that, the Guild Alliance became official. Han Sung-Gong nominates himself as the leader of the new Guild Alliance, but Yopy disagrees which makes Principal question if Yopy himself felt he was the most qualified. Yopy proposes a fight for the position.[2]

Principal listens to Yopy's proposal about the fighting for the alliance leader position. Principal rejects the leadership position as she did not want to cause more trouble and wants Nightmare's subjugation to be the priority. She agreed with Yopy's suggestion in the end that Giga and Dark Land should duel for the position.[3]

Principal directed Stone to the Southwestern Field, where about a 1000 Nightmares awaited him.[12]

Whilst meditating in Eugria and surrounded by the pink orbs that correspond to the Big 4 Guild agreement, Principal's mediation is interrupted when Yopy's orb shatters and is shocked that Yopy was able to break it with a superior skill to her own.[6]

Retrieved from "https://hardcorelevelingwarrior.fandom.com/wiki/Principal?oldid=49180"
Community content is available under CC-BY-SA unless otherwise noted.