Ancient Dragons are the firstborns of the Primordial Dragons who came at the start of the world. All magic originated from the dragons, even the ancient Majins copied the dragons at first.[4]

The two dragons were as powerful as the gods, and they were protecting order in their respective realms.[6] A pair of Dragons, Good (Light) and Evil (Darkness), were one body.[6] The dragon's offspring's thrived and flourished and multiplied to fill the world.[6] This was also the will of The Absolute God.[6] With the intention of destroying the the two Primordial Dragons, one of the four Gods deliberately corrupted the children of the Primordial Dragons. It was to steal their forbidden power.[6]

The Evil Dragon ate his children up as punishment.[6] Enraged by this, The Dragon of Light held a grudge against him.[6] Light and Darkness started to fight.[6] The Primordial Dragons fought each other for over a millennium and their blood soaked the earth, leaving magic and technology in the world.[1] After gnawing at each other for a thousand years, the two dragons finally found out that they got played by one of the Four Gods, but both dragons had already become weak. When the Gods disappeared because of Yopy, the power they left behind got absorbed into the Primordial Dragons. [6]

Such is the tremendous power of the Primordial Dragons that their clear and distinctive mana spread and could be felt from thousands of miles away by someone as powerful as No Name, the Queen of Nightmare.[3]

The Trial of a Dragon Arc

Advent of the Dragons Arc 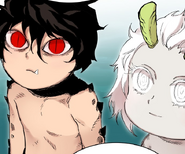 The young Vinjure and Lahru at the start of Lucid Adventure

Dragon of Light (Good) and Dragon of Darkness (Evil)

The Primordial Dragons suppressing Nightmare in the human world

The Primordial Dragons and the Demon King - Hardcore Leveling Warrior

태초의 용들 is translated as First Dragons by LINE Webtoon.

태초 means "the beginning [of the world]". 태초의 is usually translated as "primordial".

태초의 용들 means Primordial Dragons. Some translators translate it as Dragons of the Beginning. Essentially, the name implies that they are Dragons that have been in their respective world since its inception.