“The moment you broke my curse, you became my king. I'll make you the greatest king there ever was.”
― Pooh Upooh to Yopi[source]

Pooh Upooh is an NPC in Lucid Adventure and is one of the representatives of Yopi Land. She is "Yopi's Left Arm"[2] and serves as his Advisor.[1] In the past, she was the Boss of the Dungeon of Cursed Black Magic.[3]

Initially, Pooh Upooh had a gothlike appearance with green eyes, green lipstick, and stitches across her entire body. Due to her being an undead, her skin was similar to that of zombies and had skin patches. She had long white hair, wore a dark green robe with a red shirt underneath, white pants, and green boots.

After her soul transferred to a new body, her appearance was now that of a young woman with yellow eyes and pale blonde hair that she styled into a pony tail. She still wore her robe after this albeit with nothing underneath.

Before the Combat Tournament, she was wearing the same cream colored short-sleeved shirt with a Master Yo-Yo insignia on its front that Yopi wore, black shoes and black shorts. During the Tournament, she wore the same attire she had back then albeit with black pants this time around.

Two years later, she had reverted back to gothlike appearance albeit without the stitches and skin patches. She styled her hair into a half ponytail and changed her entire attire. She now wears a torn black short jacket with long sleeved black and blue dress underneath. 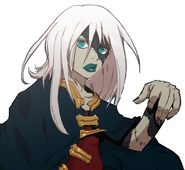 Pooh Upooh during the Subjugation Round 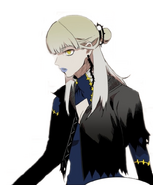 Pooh Upooh during The Great War 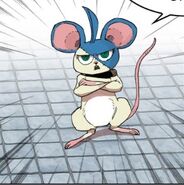 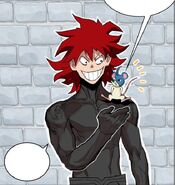 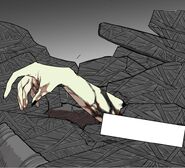 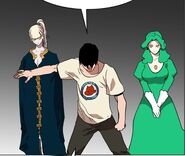 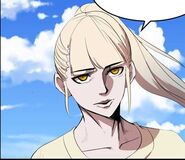 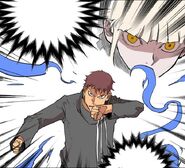 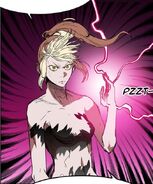 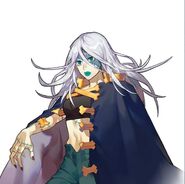 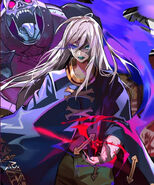 She does not take it lightly when she feels that Yopi is being disrespected as she scolded Tac for being casual with him. She's also a nonchalant person outside of work as she nonchalantly gave her stolen staff away to Dark and returned Armes and team Bamboo Spear Man to their original forms. She has self sacrificial attitude as she had offered up her life multiple times in order to win battles or help her team escape. According to Yopi, she's also bad at lying.

As a renowned strategist, she's smart, calculating and is knowledgeable about many things. She had come up with a plan that could've beaten Team Dark were it not for Heart Heater's surprising power and had even memorized all of Hardcore Leveling Warrior's moveset when he fought. She and three other strategists had quickly come up with a plan that will be able get rid of Guild Nightmare in just a month.

Pooh Upooh serves as an advisor to Yopi and is referred to as Yopi's favourite.[5][6] She always worries about Yopi and was against him giving Dark's party the Grade S Secret Quest, fearing that it would affect his exp and stats. She regularly nags him to act like a proper King.[7]

As one of the other people in Yopi's close circle, Pooh Upooh is very close to Tac. She is often frustrated by his rashness and lack of foresight, using the nickname of "duck mouth" and regularly scolding Tac for not being respectful enough to Yopi.[5]

Pooh Upooh and Lime are like sisters.[8] When Pooh Upooh tried getting Lime to run from Rigos after she sensed his tremendous magic power, Lime refused to leave her side and stayed to fight with her.

When Pooh Upooh was captured by Scallion Head, Lime was willing to chase after him alone.

Pooh Upooh maintained a business relationship with Hardcore Leveling Warrior as she allied with him in the Subjugation Round. She acknowledges his power as she believed they could stand a chance against Light in that round and she thought that getting rid of Hardcore Leveling Warrior in the PVP Round would guarantee her team a win. She's also aware of his sly nature and questioned him when he offered to help her get back to her body.

As Dark's mentor, she had told to never be afraid of numerous enemies and that if he couldn't do what she told him to do, then he just wasn't talented. Though she does seem to have been a little bit fond of Dark as she gave away her stolen staff to him for his familiar and thought he was an interesting kid when he took in the hohoians. When Dark talked to her fading soul, she told him that he was becoming like Hardcore Leveling Warrior, his own interests came first before others. She also said that since she was dead now, she could no longer tutor him. She had entrusted him to say her last words to Yopi before the latter actually appeared.

When they fought each other in the PVP Round, she was thoroughly impressed and surprised by how advanced Dark is in the art of black magic now, exclaiming that it's as if he was taught by a master class.

They didn't interact much although as allies, they were on good terms as during the PVP Round, Pooh Upooh warned Sora that she can't take her and that she was willing to spare her life if she gave up. Pooh Upooh had originally thought that she was easy to deal with as well.

As allies, Pooh Upooh was on good terms with them as she cooperated with them on multiple occasions. Two years later however, it is unknown if the Grass Roots Guild are still an ally to Yopiland.

Pooh Upooh is a named Black Wizard and shown to be extremely powerful.[9]

As a Black Wizard , Pooh Upooh uses Dark magic related to summoning undead creatures, spells and curses. She does not engage in direct physical combat.

It appears that Pooh Upooh has been alive for a very long time, possibly transferring her soul to bodies that matched her Soul Wave. This theoretically makes Pooh Upooh immortal.

As a Dark Magician, Pooh Upooh relies on her powerful summons to both attack and defend her. She mostly supports her summons by using high tier binding skills such as The Hands of the Deceased so that they are able to attack her opponents.

Black Wizard : Pooh Upooh is a very powerful Black Wizard and has completed her 4th Job Advancement. Her Jobs have not been revealed as of yet.

It is unknown if NPCs have Personal Attributes.

Pooh Upooh is able to transfer her soul or part of her soul into another body as long as the owner's soul has the same soul wave as hers.[10] It can be a dead body or the body of a living entity.

Pooh Upooh was able to transfer a part of her soul to a lab rat that was running away before her body was taken away by Scallion Head.[11] The Soul Link between the lab rat and her body grew weaker the further apart they were. Once the mana tether is broken Pooh Upooh's soul left the lab rat.[12]

After Pooh Upooh's body was crushed by collapsing buildings, Dark offered his body for possession but Pooh Upooh told him that she could not use his body as their souls had different Soul Waves.[10]

Pooh Upooh transferred her soul into the dead body of a Forest Witch and now uses that new body.[10]

Pooh Upooh's barrier, the realm of souls, where she reigns suppremes and all her opponents are weakened. Within the soul realm, all damages directly afflicts the soul and when the soul dies, the character is presumably deleted.

The only ones able to enter the Soul Realm are incredibly skilled Black Wizards and the only way out is to defeat Pooh Upooh, the caster.

Yopi theorizes that The 28th Forest Witch might be one of Pooh Upooh's descendants, thus implying that she is extremely old.

Pooh Upooh accompanied Yopi back to Yopi Land after the Castle was attacked by assassins. Yopi told her to put a tail on Team Dark and report back to him.[5]

She was present during Yopi's meeting with Giga's Diplomatic Ambassadors.[13]

She escorted Yopi to his meeting with the members of The Easter Alliance, chastising him for being late.[7]

Pooh Upooh entered the Combat Tournament, representing Yopi Land in Team Yopi Land. She was seen with Team Yopi Land during the start of The Preliminary Round.[14]