For other versions of the "Lacerate", see Lacerate (Disambiguation).

“This isn't a physical attack...!! This is a feeling of being erased from the origin of my existence!! Original, just how did you reach such a level..!!”
― Nightmare The Best Swordsman[source]

Origin(元)[1] is a sword skill created by The Best Swordsman to improve his half-lacerate.[1]

It is the strongest skill of the The Best Swordsman's swordsmanship, which he made by overlapping countless incomplete lacerates to reach the extremes of a swordsman.[1]

If the perfect lacerate completely cuts off the form of an existence from its concept, the 'origin' of The Best Swordsman is an extremely compressed dot of sword attacks, which repeatedly stabs the enemy at transcendental speeds.[1] The extinction dots of nanometer size are repeated to form an extinction line, and the lines gather to form a surface.[1]

The skill consumes a lot of mana and the caster cannot move when the skill is executed.[1]

...to create the lines of extinctions... 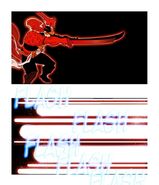 ...which form an extinction plane that are fired at the target at transcendental speeds... 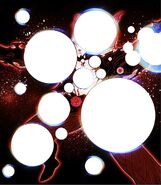 ...that erases the existence of Nightmare The Best Swordsman

The Best Swordsman getting into his Origin(元) stance...

원(元) is translated as Core by LINE Webtoon.

원 is the hangul form of the 元, which means "cause; origin; source", "beginning; first; prime", "basis; foundation", "(finance) capital" or "principal".

Origin or Source fits in best with the definition of the skill as Nightmare The Best Swordsman even said he felt like he was being "erased from the source(근원)" of his existence (LINE translated it as "origin of his existence"). 근원 means "root, cause, source, origin" which is a play on the skill's name and which LINE Webtoon themselves translated as The Origin for Zero's base.

Curiously, in Chapter 2 Episode 132 of Gosu, '존재의 근원이' was translated as "Source of Existence", this further shows the inconsistency of LINE Webtoon's translations across the Korean webtoons.

The skill is meant to cut the very source, origin of a person's existence which is why LINE may have translated it as "core". The skill cuts the very essence of the person aka the core of a person. While the LINE translation contains the "spirit" of the skills function, "Origin" is the literal definition so it will be used.