"You now have the power to kill your father" ― Zero

Oedipus is the personal attribute of Sam Han.

Oedipus was given to Sam Han directly by Zero during his character creation. It gives him the power to kill his Father and God of Lucid Adventure, Roy Han.[1]

As an heir to the Giga and the eldest son, Sam Han very soul desire is to overthrow his father's position and rule Giga himself. He tried to act like he did not care but he was seen through by Zero.[1]

She granted him this ability in hopes he would help her kill Roy Han and as a bargaining tool so that they could help each other.[1] 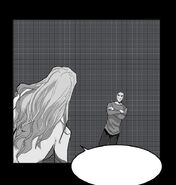 Retrieved from "https://hardcorelevelingwarrior.fandom.com/wiki/Oedipus?oldid=22460"
Community content is available under CC-BY-SA unless otherwise noted.