Octonash was a powerful monster and a Field Boss in the Subjugation Round. She was also the servant of the Great Demon, Ligos.[1]

She was the Three Star and Four Dots Field Boss that Team Choco Bibi, Team Dark, and Team Taek faced during the Subjugation Round. She was defeated and killed by Hardcore Leveling Warrior.[2]

In her monster form, Octonash is an enormous red snake-like octopus with multiple yellow eyes and tentacles for hair.

In her humanoid form, Octonash is a female with a small and slender build. She has pinkish red skin with yellow eyes and pinkish red hair as well. Within her right eye are multiple smaller eyes and she has a black mask that merged with hair. She wore a black outfit and had a small black tail.

According to Mentirok, she was very beautiful. 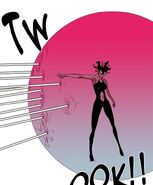 Octonash is an arrogant monster who likes to play around with her prey before killing them off. However, whenever something threatens her, she will immediately take things seriously and try to finish the battle as soon as possible.

Rigos is Octonash's master that she greatly admires and thinks is the most powerful demon ever. She refers to him as "Demon King-nim" which is a sign of respect.

She greatly fears disappointing her master as when her master's shield cracked, she started to panic especially when he asked her if she was losing.[2]

Octonash and Todish are fellow subordinates of Rigos and have served him together for a long time.[3]

In her monster form, Octonash is an incredibly strong and tough monster as took on the combined power of Taek's J.R.I.R. Crush and Hardcore Leveling Warrior's Moonlight Slash.

When she morphs into her humanoid form however, she possesses monstrous speed and her overall power increases. She instantly appeared behind Choco Bibi and stabbed him in the back without any of them seeing her move. She split the ground in half when she missed her attack against Drip Soup and Tempest.

Octonash normally uses her monster form against ordinary opponents and finishes them off with a powerful blast or summoning her mini clones. When she deems her opponents worthy, she morphs into her human form and 'plays' with them.

When the fight starts to turn against her, she immediately takes things seriously and attempts to finish the battle as quickly as possible.

At some point in the past, Octonash became a loyal servant of Ligos.

In her monster form, Octonash met with the Alliance of Team Dark, Team Choco Bibi, and Team Yopy Land, hovering above them.[1] She expressed her desire to feed the party to her master and immediately launched a quick breathe attack. After she noticed that the party teleported, she summoned her babies to attack them.[4]

Octonash launched a fire breath attack at Hardcore Leveling Warrior and Taek who taunted her, however they dodged the attack. She was then shot with multiple bullets by Tempest however she thought the bullets felt like grains of sand until they exploded. She was then met with a combined attack from Hardcore Leveling Warrior and Taek which scarred her and made her morph into her human form. After she morphed into her human form, her threat level increased to three stars and four dots which was previously three stars.[4]

She decided to attack Choco Bibi, instantly appearing behind him and stabbing him through his chest. She then left Choco Bibi to bleed to death, kicking him down. She was again by Tempest but none of the bullets penetrate as she was protected with the Great Demon Rigos' shield. She caught one bullet and flicked it back to him but it missed as Drip Soup rescued Tempest. Hardcore Leveling Warrior and Taek tried to attack her but couldn't break her master's shield, amusing her. She then noticed that Hardcore Leveling Warrior spaced out and maneuvered herself into stabbing him from the back but was punched towards a mountain by Taek. Octonash merely grinned from this attack.[4]

Octonash fought against Hardcore Leveling Warrior again and laughed at his attempts to break her shield. She then smash Hardcore Leveling Warrior to the ground, making a crater. However she was shot again by Tempest who managed cracked her shield. Octonash was surprised by this and noticed the small floating beings called, Angels, who threw a grenade at her and destroyed her shield, creating a cross-shaped hole on the ground. Octonash then realized they had access to God's Weapons and planned to retreat and attack once more. However as she jumped out of the hole, she was suddenly met with Drip Soup who almost slashed her midsection in half with a blue Divine Sword.[4]

Octonash was blasted back into the ground because of the attack and managed to survive. She was still confused as to how they had access to Divine Weapons but a voice in her heard suddenly asked her if she was losing. She was distraught and reassured her master that she could beat them, swearing to bring their heads to him. She launched herself at Drip Soup and Tempest, now determined to kill them. The pair dodged her attack, making her split the ground in half. She then dashed for Tempest but the latter was shoved away by Hardcore Leveling Warrior. Octonash cursed herself as Hardcore Leveling Warrior killed her with Moonlight Slash.[2]

As Octonash lay dead on the ground, she started squirming which alerted Drip Soup. Something then came out of her body, blasting Drip Soup's head off and killing Choco Bibi, revealing itself as a giant monster salamander.[2]

Octonash's corpse along with another giant monster was used by Pooh Upooh through Instant Ghost, to attack Todish, blowing him away to a nearby mountain. Todish retaliated by raining acid on them, melting away Octonash's arm and the other monster's as well.[3]

She and the other monster were then merged by Pooh Upooh with Todish's corpse to attack Ligos however it didn't work as Ligos shattered their arms with his ice magic.[5]

Octonash was mentioned by Mentirok who he used to compare Arachnea with in terms of beauty and power.[6]