Nutella, also known as Mage Nutella[1], is an elite fairy from the fairy city Uni. She is one of the summons of King Yopi.[1]

Nutella has large eyes with a white scalera, brown iris and a disproportionately large white pupil. She has long silvery/blondish hair with bangs that reach her shoulder and a long pony tail. The bangs and the ponytail have orbs of various colours attached to them.

Her face is light pink in colour with a dark pink circle on either cheek.

He right arm is yellow, scaly and has 3 claw like fingers, similar to the talon of a bird.. Her right arm is like a regular human sized hand and the same colour as her face. She has an orange-brownish lizard-like tail.

Her outfit is composed of an off-the-shoulder black poncho-like garment that reaches her waist, a blue steel blue track-suit like trousers with white stripes on it side and blue a hat that is pointed with yellow rings and a yellow spiral on one side.

Nutella can be seen with her Chocolate Jar broomstick. 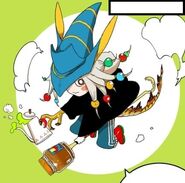 Nutella has a fiery personality. She has a habit of threatening to turn anyone who offends her into a frog.[1]

She is a trustworthy person as Yopi has summoned her for help in his most pressing times. Despite her fiery personality, she also appears to care for Yopi and was by his side when he was dying. She values people that show compassion for their friends and is willing to lend them a hand where she can.

As an Elite Fairy of Uni, Nutella is presumably a very powerful mage. Although the full extent of her abilities have not been seen, there are hints that she is a powerful magic user.

Magic Knowledge: Nutella appears to have a vast knowledge of magic, even with magic that she cannot use herself. She could tell how advanced the spatial portal in a forest was after analysing it, even though she could not

General Item Knowledge. Nutella knew were to get the ingredients for Choco Bibi's glasses.[3]

Flight Capability: Nutella is able to fly, levitate and stand in mid-air as if she was standing on solid ground.

Yopi summoned Nutella while she was in the middle of drinking her tea, earning the ire of the Elite Fairy. Yopi asks Nutella for help in finding Pooh Upooh. Nutella analyses the portal and tells him that he needs a to find someone with a spatial magic attribute.[1]

Nutella is summoned by Yopi. She says it feels like the world is ending. Yopi tells her to make a magic circle. With the magic spell that Han Gun-Jae shared with Yopi, and with Nutella's help, the energy of the users was transferred to the God of Combat and God of Time and Space.[2]

Nutella appeared after hearing Drip Soup's concern for Choco Bibi. She offered to help them make an item that could alleviate Choco Bibi's eye problem. She told Drip Soup and Tempest to retrieve the eye of the field boss Renjia.[3]

Retrieved from "https://hardcorelevelingwarrior.fandom.com/wiki/Nutella?oldid=25437"
Community content is available under CC-BY-SA unless otherwise noted.