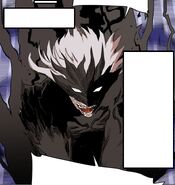 According to nightmare choco BiBi, nightmare The Best Swordsman is similar to that of the original as they both believe in teamwork and loyalty though he finds it insulting to be compared to his counterpart

Retrieved from "https://hardcorelevelingwarrior.fandom.com/wiki/Nightmare_The_Best_Swordsman?oldid=28976"
Community content is available under CC-BY-SA unless otherwise noted.