Nightmare Tempest is the Nightmare version of Tempest. He is one of the Nightmare Players created after Lucid Adventure's 'Hidden Rule' was brought back to the surface by Zero.

Like all Nightmare Players, his goal is to kill his original, Tempest, and take his power, becoming the new Tempest in Lucid Adventure.

All Nightmare players have pale skin, pale hair and yellow eyes. Nightmare Tempest has an unkempt wavy hairstyle and he wears a black fabric suit which he wears under a grey crop top and grey cargo pants. Two boxes of ammunition are attached to the torso area of the crop top. A decorative symbol, a gray cross over a black circle of fabric, can be seen throughout his outfit. His entire attire is a darker version of what Tempest wore back then. 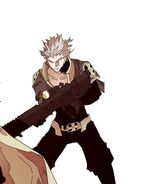 He's a lot more expressive than his expressionless counterpart as he wears a psychotic smile on his face all the time, made a mocking expression when Tempest looked at him, swearing and laughed like a mad man at Tempest's continued shooting at him. His personality is the exact opposite of Tempest's personality.

There wasn't any interaction shown between them but it can be assumed that they are on good terms as they are both Nightmare Grass Roots members and part of the same squad.

Like all Nightmare Doppelgangers, Nightmare Tempest holds the same hostility and hatred for his original. He repeatedly mocked Tempest for showing his "hand" and his attempted shooting when they fought in their first confrontation. However, he impressed by how Tempest shoots from sub-space.

Nightmare Tempest is completely obsessed with shooting his original full of holes as he wants revenge for what happened in their first confrontation.

Nightmare Tempest became much stronger in their second confrontation as even Tempest could feel his power when the Nightmare Player wildly shot every single one of his angels, causing small explosions from Tempest's point of view; for context, when Tempest's angels exploded in their first fight, it was a very large explosion.[1]

His original even stated that he was fast as Nightmare Tempest instantly covered an incredible amount of distance (one mile), appearing before his original at once with guns blazing.[2]

Ranged Weapon Proficiency: Nightmare Tempest is able to wield any ranged weapon he has with great prowess and accuracy. He can shoot or throw even reload multiple rounds of projectiles with quick succession. As a proficient ranged fighter, his marksmen skills are extraordinary where he is even capable of hitting pressure points and other weak spots with ease.

Speed: Nightmare Tempest is very fast as he was able to immediately close an incredible amount of distance (one mile presumably) between him and Tempest within seconds.[2] Tempest was also unable to get away from him as Nightmare Tempest consistently closes their distance with each attempt.

Nightmare Tempest is a wild shooter, preferring to shoot at all directions, with a Minigun of all things. He has the same play style as Tempest where he borrows mana from Nightmare Choco Bibi that allows him to teleport to his desired vantage points.

As a marksman, Nightmare Tempests also prefers to shoot from vantage points with his sniper rifle. Despite his psychopathic tendencies, he is quite intuitive as he was able to figure out that Tempest was shooting from another dimension, a sub-space. Despite this, Nightmare Tempest most prefers closing the distance between his opponent and force a close combat.

Nightmare Tempest rose from his original's shadow and fought against him until the latter was teleported away.

Nightmare Tempest and other Nightmare Players are teleported to Lakiren Castle by Nightmare Choco Bibi after the Nightmare Dummies were destroyed.

They then began their attack on the castle and conquered it quickly after.

Nightmare Tempest sat on a tower, killing off the last resistance of Lakiren Castle.

Nightmare Tempest and his guildmates teleported to Crosswalk of Moon in order to retrieve the Divine Item for the Queen. He and his squadron then encountered their originals after the Nightmare Chimera destroyed the dungeon.

He was teleported along with his squadron back to the base by Nightmare Choco Bibi.