“Strong companions, you say... I don't care about all that. Killing Hardcore Leveling Warrior, that's all I care about.”
― Nightmare Sora[source]

Nightmare Sora and Sora met each other again, with Nightmare Sora initiating the fight. After both were teleported by Nightmare Choco Bibi into another subspace, Nightmare Sora unleashed her Nightmarization and overwhelmed Sora. However, after Sora's power awakened, she was the one overwhelmed in the end and was eventually killed by Sora.[1]

All Nightmare players have pale skin, pale hair and yellow eyes. She has a short high ponytail and wears a light grey scarf around her neck.

She wears samurai themed armor with a grey and black theme which consists of a breastplate, scaled shoulder plates, gauntlets, scaled waist, black pants that tucked inside her black and grey boots, and she wore dark clothing underneath all that.

Overall, her armor is a darker version of Sora's Armor during the PVP Round. 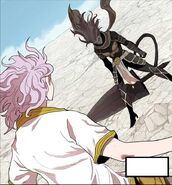 Nightmare Sora faces off against Sora and No Name.

Nightmare Sora and Nightmare Ego after being teleported by Nightmare Choco Bibi.

Nightmare Sora in the Demon World.

Nightmare Sora's attack is deflected and is blown away by Hardcore Leveling Warrior. 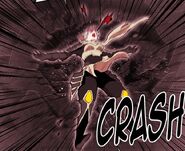 Nightmare Sora crashes into a wall.

Nightmare Sora attempts to attack Hardcore Leveling Warrior once more.
Add a photo to this gallery

Nightmare Sora was an aggressive and angry person, having an angered expression on her at all times even more so when Hardcore Leveling Warrior is within her vicinity. She immediately tried to attack Hardcore Leveling Warrior who was suppose to be Nightmare's ultimate weapon without warning and only stopped when the latter promised to fight her once she's "whole".[2]

She was a hypocrite as despite her supposed hatred towards Hardcore Leveling Warrior and that she doesn't need him, she still wanted his help after all especially after being overwhelmed by her original's power, even madly asking why he isn't granting her any buffs. Unlike her original, she is a weak-willed person because as soon as she was overwhelmed by her original's power, she immediately asked for Hardcore Leveling Warrior's assistance instead of relying on herself. Instead of making her own efforts to become stronger, she chose to give herself up to become stronger.[1]

Nightmare Sora has not shown much of her interaction with her fellow Nightmares however, judging by her dialogue with Nightmare Choco Bibi, she seems to not care about them and that they should mind their own business as she doesn't need their help, calling Nightmare Choco Bibi an idiot for assisting her.

Nightmare Sora was completely disgusted by Sora and what she strives for. She ridiculed her for being occupied with some nonsense like finding who she really is, and called out her obsession with Hardcore Leveling Warrior and wanting to be someone he wouldn't be ashamed of, that all she talks about is him, adding on that Sora can't do anything without him.

She states that she is different from her and that she doesn't need Hardcore Leveling Warrior's approval unlike her original. She further insulted Sora having to need Hardcore Leveling Warrior's approval, that she's just a sidekick of his, and that she is nothing without him. Despite being overwhelmed by her original's power, she still thought herself higher than her, stating repeatedly that she was better and perfect than that dependent woman until she died.

So unlike the rest of her fellow nightmare doppelgangers, she has no interest and intention on killing her original. Instead, she's much more focused and interested on killing Hardcore Leveling Warrior.

However, despite her anger towards him, she still thought that Hardcore Leveling Warrior would assist and buff her in her fight against her original. She become more angry, stating that he's been snobby the entire time, madly questioning what he is so busy doing that he's not giving her any buffs.

As a Nightmare Player, Nightmare Sora was born at the max level on her creation and is innately powerful due to her access to the overall power of Nightmare. Nightmare Sora possessed tremendous power as stated by her original, Sora, and her mana was stated to also be creepy by Ego.[3][4]

Swordsmanship: Nightmare Sora's swordsmanship was powerful as when she clashed swords with her original, Sora stated that she had tremendous power.[3]

Nightmare Sora's True Awakening or Nightmarization[5], a powerful form that she created by rearranging Sora's messed up Personal Attribute. Her Combat Power exponentially increases as even Sora can feel it going up and its mana creeped Ego out. It was the most powerful form she could find and she doesn't care about getting wounded despite how exposed she is in this form.[4]

Attack Power: Nightmare Sora possessed tremendous attack power in this form and a single hit from her is fatal. A single attack launched a black wave of energy that split and shook the ground itself. Nightmare Sora's knee strike made Sora violently cough up blood, bloodied her face, and almost made her unconscious. Her stomp made Sora's ribs crack as well.[4]

Incredible Speed: Nightmare Sora's attack speed was terribly fast as she sliced Sora's food item and refrigerator in half before Sora, a fast eater, could even devour her item, not giving her a chance to recover. She was so fast that she instantly appeared right in front of her original, who had just dodged her previous attack a second ago, surprising Sora.[4]

Hunger: Nightmare Sora's conceptual magic that she made by twisting the concept of the Taster that grows stronger by eating. It's the ability that one could gain by suffering from extreme hunger for food and emotions. Any energy that comes into contact with Nightmare Sora's sword gets absorbed by the God of Hunger and changed into her attack power. It is the ultimate counterattack.[4]

Nightmare Ego: Nightmare Sora possesses her own Ego though it's characteristics have not been revealed and seems to just be a dead weapon. It transforms into a Long Sword when Nightmare Sora uses her True Awakening.

Nightmare Sora rose from Sora's shadow and fought against her and No Name.

Nightmare Sora was revealed to have been saved and teleported by Nightmare Choco Bibi to another location along with other Nightmare Players. She expressed her desire of killing Hardcore Leveling Warrior and didn't care about teamwork or anything else.

Nightmare Sora is shown looking at a distance when she is notified that Nightmare Akira become the No.1 ranking player in the Nightmare Ranking System.

Nightmare Sora leaps towards him from behind but misses as Hardcore Leveling bows his head to dodge it. She is infuriated that she cannot even touch him, despite living for this exact moment. After Hardcore Leveling Warrior told her to kill her original and come back to fight him, Nightmare Sora relented and told that she'll be back after she kills her original and becomes whole.

After Nightmare Choco Bibi locked everyone in different subspaces to face their opponents, Nightmare Sora faced off against her original, Sora. After the teleportation, she immediately nightmarized and transformed, stating that she can't be a match for Sora without transforming. After her nightmarization, Sora punished Ego for being a creep as he commented that he liked her exposed form.

Nightmare Sora immediately responds with an attack that almost sliced Sora in half and instead split the ground. Nightmare Sora responded to Sora's comment, reiterating what she said that looks don't matter and that she only took this form as it was the most powerful form she could find. Nightmare Sora and her original then clashed swords, chopsticks in Sora's case, where she showed her conceptual magic, Hunger, absorbing all of the blade energy from Sora's Ego.

She then unleashed her counterattack, shaking the very earth itself and destroyed most of Sora's arm despite being it blocked by Ego. Nightmare Sora relentlessly attacked her again, not giving her a chance to recover as she immediately destroyed Sora's fridge. Sora and Ego dodged the attack but her pathway was intercepted by Nightmare Sora who then repeatedly kicked her, ending it with a knee strike that made Sora fall to the ground in bloodied pain. Nightmare Sora then started to berate Sora but is interrupted by her original's Ego Sword however she stopped Ego's attack by piercing him with her own Nightmare Ego Sword, stunning him in place.

Nightmare Sora continued to insultingly berated Sora's obsession and overreliance towards Hardcore Leveling Warrior, stating also why she is exactly different and better than her. But then out of nowhere, a large flash of light suddenly arose from Sora, shocking Nightmare Sora and forced her to back off. Sora awakens her power, turning herself into the True Hero of The Era, and from Taster to Hero of Taste. This shocked Sora as she thought that there was no such option in her karma, questioning if she transcended her Karma.

Nightmare Sora engaged Sora in combat once again, confident that her Hunger would absorb all of her original's power. After she absorbed Sora's newfound power, she mocked her as she unleashed it back at her original however it was easily picked up by Sora who used The Sword of the Hero of Taste - Fork Mode to catch it, spinning and then launching it right back at Nightmare Sora who was shocked. The attack exploded and sent Nightmare Sora flying to a nearby mountain, where she is shown her exposed inner self as she regenerates. As she regenerates, she states just how dangerous it is now because of Sora's new power and that she'll die at this rate. She then cursed Hardcore Leveling Warrior for not giving her any buffs and questioned why the hell is he so busy that he won't grant her any buff.

Nightmare Sora leaped off the mountainside and knelt to the ground, opening her own version of the Fridge. She then devoured the karma of a hundred people, stating that she won't be able to maintain herself after this but as she looks up, she is surprised by a ridiculously huge spoon from Sora. After she is smashed by the spoon, she rages on that she is better than her original, transforming into a gigantic grotesque form with mouths across her entire body. She then starts to gather a yellow ball of energy and launched it at her original. However, Sora used the Chef's Knife amplified by her new power to slice through the yellow ball of energy and through Nightmare Sora herself, killing the Nightmare Player as she explodes into a whole grand feast.[1]

Retrieved from "https://hardcorelevelingwarrior.fandom.com/wiki/Nightmare_Sora?oldid=49457"
Community content is available under CC-BY-SA unless otherwise noted.