Nightmare Elena is the Nightmare version of Elena. She is one of the Nightmare Players created after Lucid Adventure's 'Hidden Rule' was brought back to the surface by Zero.

Like all Nightmare Players, her goal is to kill her original, Elena, and take her power, becoming the new Elena in Lucid Adventure.

All Nightmare players have pale skin, pale hair and yellow eyes. Nightmare Elena's appearance is a darker version of her original's appearance. 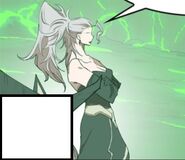 Nightmare Elena is quite calm as she doesn't express much anger on her original and she doesn't consider herself as a mindless monster.

She doesn't like violence much as she expressed her displeasure when her unknown team member squashed the Guardian of the Tower of Abstinence.

As she doesn't consider herself mindless, she also doesn't see her fellow doppelgangers as mindless as well.

Not much has been revealed but she is shown to be capable of unsealing a divine item.

Nightmare Elena arose from Elena's shadow along with other Nightmare Doppelgangers from their originals.

Nightmare Elena was saved and teleported along with her fellow doppelgangers into an unknown location by Nightmare Choco Bibi.

When the Nightmare Doppelgangers expressed their desire to kill their originals, Nightmare Elena calmed them down by saying they were not mindless beasts.

Nightmare Elena was shown trying to decrypt and unseal the divine item they took from Lakiren Castle.

Nightmare Elena and her squadron destroyed the Tower of Abstinence in search of the divine item located there.

She expressed her dislike of violence when her unknown member killed the guardian of the tower.