“Do you really think I'm gonna lose?”
― Nightmare Akira to Coma and Elena[source]

Nightmare Akira is one of the few Nightmare Players saved by Nightmare Choco Bibi during the final clash of the Gods.[3]

All Nightmare players have pale skin, pale hair and yellow eyes. He has a tall build and angular features. He wears knee length black coat. Overall he has the same appearance as Akira but darker and has short hair. 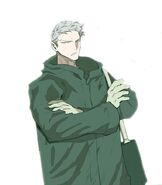 Nightmare Akira with his Baseball Bat 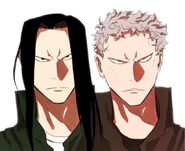 Nightmare Akira is aloof much like his original. He is also extremely confident about himself as he taunted and challenged both Elena and Coma at the same time. According to Coma, this might've been because of his main character attribute.

Nightmare Akira has not been seen interacting with any person but he did note that Nightmare Choco Bibi might've saved them for a reason when he first appeared and he was talked to by Nightmare Bamboo Spear Man about his victory over Coma and Elena.

As a Nightmare Player, Nightmare Akira was born at the max level on his creation. He is an extremely powerful Nightmare and is currently ranked NO.1 under the Nightmare Ranking System. He easily defeated the top ranker duo of Elena and Coma despite having only a 10% chance of winning according to Coma.[1]

After killing his original, Nightmare Akira absorbed him and vastly increased in power as he took his place as the new "Akira". However prior to this, Nightmare Akira displayed an incredible amount of power, enough to destroy and shatter the 999% Nightmarized Akira in one single blow.[4]

To further express this feat, not even Yopy or Akira could shatter each other in one blow despite directly hitting each other multiple times in their Nightmarized battle. Additionally implying the level of power that Nightmare Akira now received from his original.[4]

Nightmare Mana User: As a Nightmare, Nightmare Akira is able to use Nightmare mana without being corrupted and is capable of using the power of Nightmare.

Baseball Bat Proficiency: Nightmare Akira is able to demonstrate brutal aptitude and great proficiency in using bats to inflict heavy blunt force damage and/or trauma, which makes him very dangerous in close quarters combat. He can also break down structures and take out heavily armored enemies.

'Main Character' Attribute ('주인공' 특성,  'ju-ingong' teugseong)[1]: Users of this attribute have the 'Main Character' attribute presumably because Thunder is the the main protagonist of his own webtoon. The exact effect of this was never given but Coma questioned if the effect of the attribute is what made Nightmare Akira confident enough to take on both Him and Elena alone.[1]

Nightmare Akira possesses his own True Awakening which he unlocked in his fight against the Top Ranker Duo, Elena and Coma.

Nightmare Akira is a close range fighter that uses his baseball bat as his main weapon. When facing tough opposition, he uses his Nightmare True Awakening to boost his combat abilities even further.

Baseball Bat: Just like Akira, Nightmare Akira wields a baseball bat that is similar to that wielded by Thunder. The baseball bat is black in colour with a lightning insignia.

These events occurred in AE 1

Nightmare Akira enters the battlefield where Elena and Coma are fighting, smashing Coma's drones and challenged both of them to a fight. Nightmare Akira then taunts and asks them if they really thought that they can beat him. The top ranker duo are provoked and both of them engage in battle.

They have a short battle as Nightmare Akira unleashes his True Awakening at the climax and eliminate Elena in mid-air. Nightmare Akira is compared to Akira for a short while.

Nightmare Akira and Nightmare Yopy both ambush their originals and defeat them as Nightmare Akira shatters his original's body and decapitates him. He holds Akira's head up to witness Han Gun-Ho's coronation.

Nightmare Akira and Nightmare Yopy then kill their originals soon after Han Gun-Ho ordered them to.