“... It changes the user's skills, personality and everything else...”
― Han Gun-Ho[source]

Although players are banned from using Nightmare, members of The Giga Empire are not prohibited from using its power. The core of Nightmare which seems to be in Zero's head is currently with the Giga Empire. Sam Han had it fully analysed and Giga have essentially become Nightmare themselves.[8] Unbeknown to them, they are secretly being used by Zero to bring and end to Lucid Adventure. 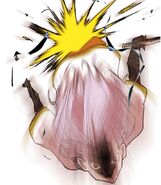