"What I really want to do as your queen is...to see the world's end with you"

New Nightmare is a Nightmare guild in Lucid Adventure. It's queen is No Name.

New Nightmare was formed when the Nightmare Players found No Name and made her their Queen.[1][2]

The guild showed up out of nowhere and has been expanding at an incredible speed. They are not just made up of Nightmares anymore, but they are also recruiting normal users as well.Their headcount has been rising at an astonishing rate. They guild even managed to rally the demon clan that were on the trapped in the outskirts. The demons were Nightmarized and on top of that, they can share skills, using Karma. By injecting karma into the the user, they destroy the rules of the world.[3]

According to the Dragon of Light, New Nightmare is trying to open the door that leads to the other world. If they open the door, the two worlds will be destroyed.[4]

By the time The Great War had started, 90% of the known monsters had been Nightmarized which further bolstered Nighmares forces.[5] 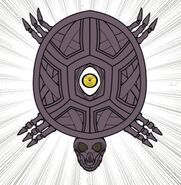 Retrieved from "https://hardcorelevelingwarrior.fandom.com/wiki/New_Nightmare?oldid=29002"
Community content is available under CC-BY-SA unless otherwise noted.