Needle is The Sixth Sword created by The Master Black Smith, Zero.

Needle is a grey colored sword that is similar to a short sword. Instead of a hilt it has a point tip.

Needle can be used a single weapon and held by it's loop to fight in close proximity.[1][2] Zero can summon a set of Needles that can fly in the air and be directed towards the target.[2]

It is strong enough to clash with The Sword of Doom's Day without any damage.[2]

Unlike the other Master Black Smiths Swords, the effects of Needle on its targets have not been seen or described.

Zero issued the command "Break him up" to a set of Needle before it flew towards HCLW suggesting the sword slices it's targets.[2]

Zero can usually bee seen spinning Needle in her hand through the loop.

The Fall of Hardcore Leveling Warrior

Zero was seen with Needle when she paralyzed HCLW although she didn't use it on him directly.

The Combat Tournament - The Subjugation Round

Zero summoned Needle and clashed with Hardcore Leveling Warrior using the The Sword of Doom's Day. She then threw Needle in the air and 9 other Needles appeared before she directed them all telepathically towards HCLW who managed to avoid them.[2] 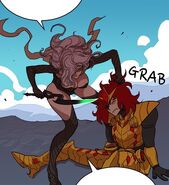 Zero with a single Needle (Episode 49) 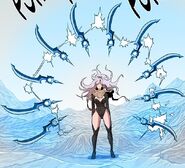 Retrieved from "https://hardcorelevelingwarrior.fandom.com/wiki/Needle?oldid=10767"
Community content is available under CC-BY-SA unless otherwise noted.