One Sword Style - Moonlight Flash, more commonly known as Moonlight Flash, is a swordsman class skill created by The Best Swordsman.[1] It is one of Hardcore Leveling Warrior's signature skills.

The user delivers a single powerful sword slash that bisects the target.[2]

Although it a powerful skill, the cut is not clean as a few of it's targets have regenerated after having their bodies cut in half.[2][3]

The skill is only "half a skill" because The Best Swordsman based it on Novelist Han's Lacerate(節).[2] Compared to Lacerate, the cutting power is poor.

According to The Best Swordsman, the skill isn't teachable.[4]

A Gambler can obtain this skill as reward for winning a 'Bet' against a user with this skill .[9]

The skill can be taught to another swordsman by someone with the skill. From what has been revealed ,the trainee has to swing their sword a couple of thousand times to get it done.[10]

Rank No.1 Hardcore Leveling Warrior preparing to use Moonlight Flash 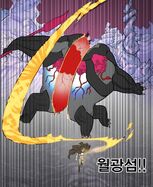 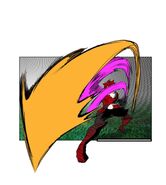 '류' is the Korean form of the hanja 流. In Japanese, 流 (りゅう) translates to "art forms; methods; styles and techniques peculiar to a person or house".

섬 is the Korean form of the hanja 閃, which means "flash".

'도' is the Korean translation of '刀' which means sword. '일도류' literally translates to the Japanese kanji '一刀流' (Romanji: Ittōryū) which means 'One Sword Style'. The word 'Ittōryū' became popularised to western audiences by Roronoa Zoro of One Piece, who uses his own Ittoryu.