Mochi is a member of Giga. She is a part of Giga's Special Investigation Department, Giga's 13th squad and a member of Giga's secret service. She is the former partner of Constant until the latter used his personal attribute on her.

Mochi is a young girl with reddish brown hair styled into two Chinese buns with talismans hanging from the two. She wears a black suit with orange long sleeve collar shirt and purple necktie, black gloves, black pants and shoes. Sometimes, she wears the classic female Giga uniform without the lion shaped shoulder armor. Though she has yellow microscope over her head. 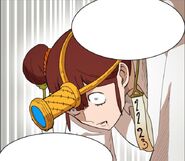 Mochi is a friendly person but she doesn't like it when orders aren't followed or when things get rough. She scolded Constant multiples times during their missions for making things more complicated and she doesn't also like doing more work.

Mochi and Constant were former partners. She was the one that made sure Constant wore his collar and was on good terms with him. It is unknown what the relationship between is now after Constant used his personal attribute on her which ended up breaking her mind a little and serious recovery.

Advent of the Dragons Arc